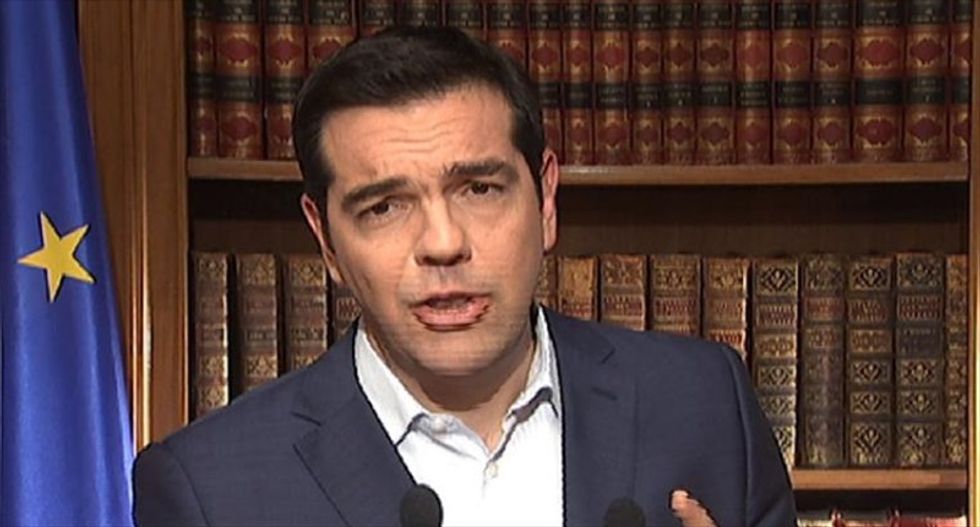 Greek Prime Minister Alexis Tsipras calls on people to vote "NO" in the forthcoming referendum as he delivers a televised address from his office in Athens, on July 1, 2015. [AFP]

Hours after Greece became the first advanced economy to default on an IMF repayment, the leftist leader used a live TV address to urge Greeks to vote 'No' on Sunday to creditors' current demands.

Tsipras, at loggerheads with Greece's creditors since his election in January, insisted a 'No' vote would "not signify a rupture with Europe" despite efforts by EU leaders to cast it as a referendum on Greece's place in the bloc.

"Come Monday, the Greek government will be at the negotiating table after the referendum, with better terms for the Greek people," he added, standing between Greek and EU flags.

His comments came after Greece on Tuesday made a last-minute proposal for a third bailout worth nearly 30 billion euros ($33 billion) to follow the two rescue programmes worth 240 billion euros that cash-strapped Athens has received since 2010.

Frustrated eurozone finance ministers agreed Wednesday to wait until after the referendum before holding any more talks, saying there were "no grounds" for further discussions.

Capital controls imposed this week meant most Greeks were still only allowed to withdraw 60 euros per day.

"I worked for 50 years on the sea and now I am a beggar for 120 euros," one pensioner in Athens said. "I have no money for medication for my wife, who had an operation and is ill."

Greece entered uncharted waters with its default on a 1.5 billion euro International Monetary Fund loan, the first by an advanced economy, and expiry of its current European bailout on Tuesday.

It is now without external financial assistance for the first time in five years.

The developments prompted Moody's to cut its credit rating for Greece to a deep-junk "Caa3", warning it was now less likely that official creditors will support the country, whatever happens in Sunday's referendum.

Greece has requested more time to pay its debt, but the IMF said in a statement Wednesday that allowing a borrower to delay repayment was generally ineffective in helping a country overcome crisis.

Voicing frustration with the ongoing debt saga, IMF chief Christine Lagarde told CNN that talks between Greece and its creditors would benefit from "a bit more adulthood".

IMF member countries "would like to see the situation resolved (and) uncertainty waived," she said, urging Greece to undertake economic reforms.

Stock markets, however, rebounded Wednesday amid hopes that a deal could still be struck to keep Greece in the eurozone.

Ahead of the finance ministers' call, German Chancellor Angela Merkel had effectively ruled out all negotiations until after Sunday's referendum.

"The world is watching us. But the future of Europe is not at stake," Merkel told Germany's Bundestag lower house of parliament.

Signalling a possible rift in Europe's united front, France's President Francois Hollande for his part called for an "immediate agreement" after six months of stalemate.

But Eurogroup chief Jeroen Dijsselbloem made clear there were "no grounds for further talks at this point" because of the Greek government's refusal to call off the referendum.

He added that ministers also agreed to "take note" of a letter from Tsipras that emerged Wednesday telling creditors he was ready to accept terms they offered at the weekend.

The letter added, however, that any deal would have to allow Greece to maintain a 30 percent VAT discount on islands and postpone a 2012 pension reform until October 2015.

Ahead of the referendum, an opinion poll on Wednesday showed the 'No' camp in the lead with 46 percent, against 37 percent for 'Yes' and 17 percent undecided.

The 'No' vote share was down compared to before capital controls were introduced Sunday.

The Council of Europe, a pan-European human rights body, has criticised the vote, saying it was being organised too quickly and that the question was not clear.

Also on Wednesday, the European Central Bank again decided to keep the amount of emergency funding Greek banks can access frozen at around 89 billion euros.

It was the ECB's decision on Sunday to refuse to increase emergency funding for Greek banks that pushed Athens to close lenders for a week and impose the capital controls.

In an interview on Greek television, Finance Minister Yanis Varoufakis said the restrictions could be lifted "immediately" once a new debt deal was agreed.

He also insisted that "Greece is, and will remain, in the euro".