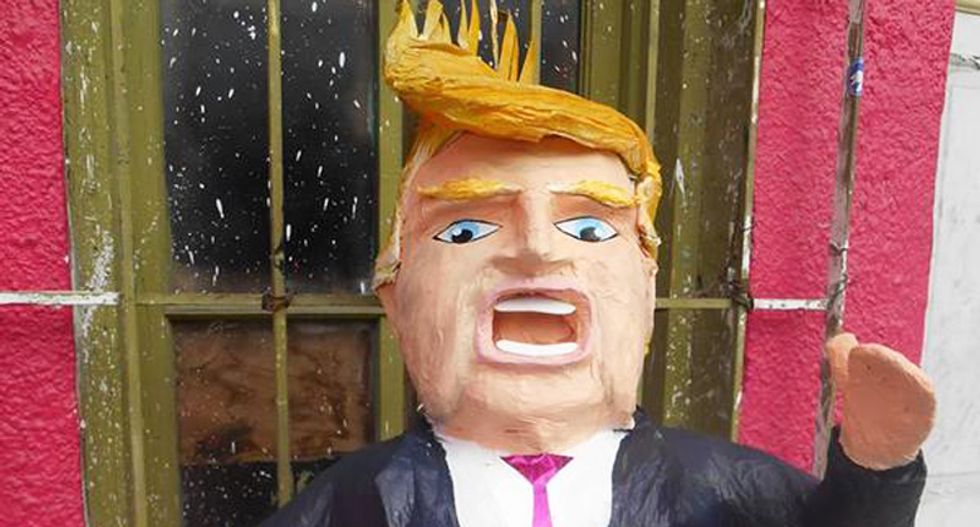 Real estate mogul and GOP presidential candidate Donald Trump has angered the Spanish-speaking world by saying Mexican migrants are drug runners and rapists. He then doubled down on those comments after a backlash ensued.

But that hasn't stopped him from profiting off their labor.

According to the Washington Post, most of the workers currently building Trump's new $200 million hotel in Washington D.C. are migrants, and some came to the United States without documentation.

"The majority of us are Hispanics, many who came illegally," one worker, Ivan Arellano told the Post in Spanish. "And we're all here working very hard to build a better life for our families."

While Arellano is documented, some of the workers said they were not. Others expressed anger at the man whose empire they were helping build.

"Do you think that when we’re hanging out there from the eighth floor that we're raping or selling drugs?" window worker Ramon Alvarez asked. "We're risking our lives and our health. A lot of the chemicals we deal with are toxic."

A spokesman for Trump told the Post that Trump hires a contractor that then hires a subcontractors, and it's contractor Lend Lease who must ensure workers are documented.

"This of course assumes that the assertion regarding the employees’ status is accurate," Michael Cohen, Trump's legal counsel, told the Post.

Trump's comments on immigration included a promise to build "a great, great wall on our southern border." The US government already spends more on border security and immigration than all other agencies combined. Ramped up militarism at historically high-traffic crossings in urban areas, like Tijuana-San Diego, have forced migrants to cross through the deadly deserts of Arizona and Texas, resulting in hundreds of deaths every year.

Last year, at least 307 people died crossing, according to Border Patrol statistics. The year before, at least 445 died. Many who die crossing are never found.

Aviva Chomsky, professor of history and coordinator of Latin American, Latino and Caribbean Studies at Salem State University, last year said the border-on-steroids approach doesn't keep people out - it keeps them in.

Migration has historically been cyclical, she said. People would come and work, then go home. What changed that was the massive build-up of the US-Mexico border.

"The more the border is militarized, the more the undocumented population grows. Instead of coming and going, people come and stay because it's too dangerous to keep gambling with the repeated border crossings," she said in an interview last year.

By trapping people in the US because crossing back south is too dangerous, and also denying them legal status, billionaires like Trump guarantee themselves a cheap and exploitable work force.

That's not to say Trump's comments haven't cost him. Criticized as racist, they have led business partners from Macy's to Mexican billionaire and world's second-richest man Carlos Slim to cut ties. Various Latin American countries have vowed to boycott Trump's pageant and Univision will not air it.

On Thursday, undocumented workers will march against Trump's stance in D.C.

"As a D.C. food justice and labor activist, I am standing in

solidarity with the protesters who are marching against Donald Trump on Thursday," said organizer Jeremiah Lowery in an emailed statement to Raw Story. "Mexican and Latino immigrants help shape the culture and identity of Washington, D.C. And its time for the D.C. labor and activist community to stand up to anyone who wants to promote hate speech while doing business in our city"

This isn't the only time Trump has been caught saying one thing and doing another.

In a 2012 appearance on David Letterman's late night show, Trump spent a portion of time bashing China, saying it was "just ripping our heart out."

Letterman then peered closely at a new line of ties Trump had brought in to plug.