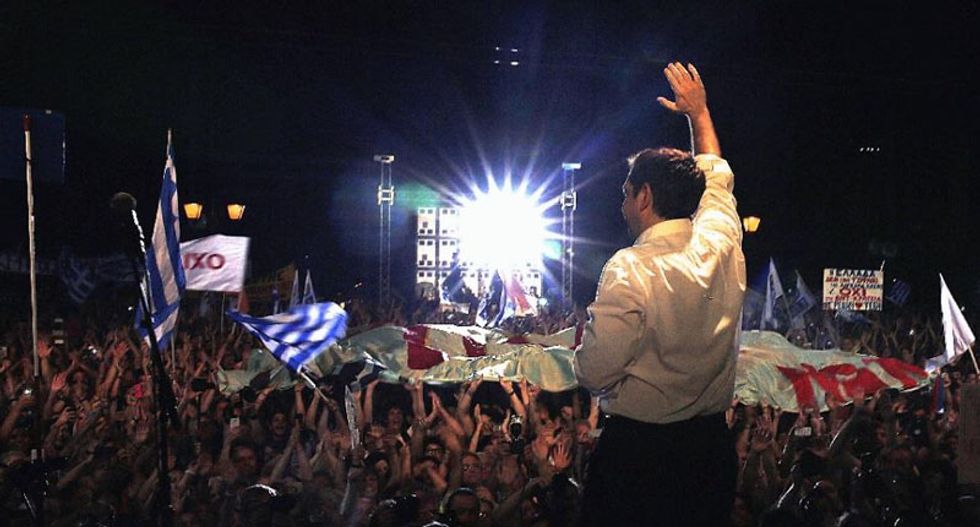 Europe faces a near impossible choice between giving debt-laden Greece a chance or pushing it out of the euro and risking global turmoil, analysts said Sunday, after Greek voters overwhelmingly rejected international creditors' terms.

Berlin, Paris and Brussels all warned in the run-up to Sunday's referendum that a 'No' vote to the EU-IMF reform demands was a 'No' vote for the single currency and a return to the drachma.

Some analysts say the cold reality of a possible "Grexit" may make some leaders agree with Prime Minister Alexis Tsipras that the shock result does not necessarily have to mean a break with Europe.

"EU member states will give Greece another chance, but there is very little time and this will really be the last chance," Nicolas Veron of the Bruegel think-tank in Brussels told AFP.

He said a Greek exit from the 19-country currency union could come about "very rapidly" if action was not taken quickly.

The referendum result -- a rejection of more austerity after five years of pain for Greece, came as a surprise to many European governments -- because "lots of people were relying on the rationality of the process, and confused their desires for reality," he added.

The creditors face a difficult choice between trying to avoid the risk of contagion from a Greek euro exit -- plus the political and symbolic implications of the loss of a historic European nation from the club -- or sticking to their austerity guns.

The radical leftist government led by Tsipras and his Syriza party has been at loggerheads with its creditors since it was elected in January on a tough anti-austerity platform.

Talks broke down last week when the eurozone refused to extend Greece's bailout past June 30, and there are still few signs that the other 18 members of the currency club are willing to compromise.

Eurozone leaders are to hold a special summit on Tuesday in Brussels which could well be the last chance to reach some kind of deal before the European Central Bank cuts off emergency liquidity assistance (ELA) to Greece's struggling banks.

Slovakia's Finance Minister Peter Kazimir poured cold water on the chances of success, saying that the "nightmare of the 'euro-architects' that a country could leave the club seems like a realistic scenario after Greece voted 'No' today."

"I think it's going to lead to Grexit," Pieter Cleppe of the Open Europe think-tank told AFP.

"The EU doesn't want to be seen as the one pulling the trigger. But that shouldn't be the only reason for not pulling it -- I think it would be irresponsible not to prepare for drachma if you think it's impossible to get a deal with the eurozone finance ministers.

"And I think that's going to be very hard, so why keep pretending and wasting precious time, when you risk social breakdown."

He said that without an extension of ECB funding "there is no other way than to provide a parallel currency."

Greek Finance Minister Yanis Varoufakis insisted on Sunday night that a parallel currency was not on the table and that Athens could strike a deal, but that will take hard work, analysts said.

Pouring more money into the black hole of Greece's finances will not be popular with voters in other eurozone countries, particularly in the more hardline Baltics, Finland and the Netherlands, said Anne Laure Delatte, an economist at the French Institute for Scientific Research.

"What could work in the Greeks' favour is the radical uncertainty, and the pressure from the Americans, who fear a new financial crisis," she said.

"But what could count against them is the idea that the eurozone could do better without them, and the pressure from voters."

Failure to do a deal would be a boost for populist leaders like France's Marine Le Pen and Britain's Nigel Farage who made gains in European Parliament elections last year, said Pascal Delwit, political science professor at Free University of Belgium.

"I find it hard to imagine that we are heading towards Grexit," he said. "European leaders don't want to open a Pandora's Box."