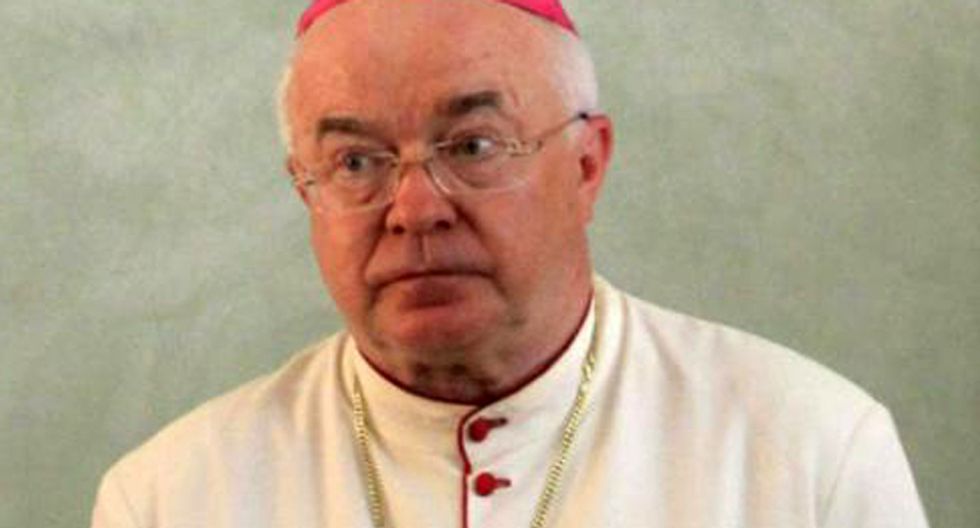 Jozef Wesolowski, pictured here in 2011, is accused of sexually abusing minors during his 2008-13 stint as Vatican ambassador to the Dominican Republic and of possessing child pornography in Rome in 2013-14 (AFP)

A former Polish archbishop became ill and was placed in intensive care ahead of the opening of his unprecedented trial on paedophilia charges at the Vatican, officials said Saturday.

Jozef Wesolowski is accused of sexually abusing minors during his 2008-13 stint as Vatican ambassador to the Dominican Republic and of possessing child pornography in Rome in 2013-14.

His case is seen as a test of Pope Francis's push to prosecute sexual predators in the face of accusations that the Catholic Church has not done enough to identify and punish paedophiles in its midst.

The hospitalisation of the 66-year-old reduced the first day of his trial, which was open to the public, to seven minutes before the judge recessed until a later, unspecified date.

Wesolowski "was taken ill and was taken to a ... hospital where he was placed in intensive care," prosecutor Gian Piero Milano told the court, with Vatican officials saying that the former cleric became sick on Friday.

When the trial reconvenes, Wesolowski's lawyers may motion for it to continue in closed session.

His trial marks the first legal proceedings against a church official since Francis overhauled the Vatican justice system in response to swelling accusations of child sexual abuse by prelates.

If Wesolowski is convicted in the trial, in which the judge, defence lawyer and prosecutors are all Italian lay people, he could face a six-year prison term -- more if aggravated circumstances are found -- which he could serve in Vatican detention facilities.

Wesolowski was secretly recalled from his posting in the Dominican Republic in 2012 after the Church hierarchy was advised he had been regularly paying young Dominican boys for sexual services.

He was defrocked by a Church court in June 2014 but remained free until September of that year, when he was placed under house arrest under an order the Vatican said came directly from Pope Francis.

"The (pornography) case is based on an offence introduced to Vatican legislation by Francis in 2013. The other involves sexual abuse of minors prosecuted on the case assembled by legal authorities of Santo Domingo," the Dominican capital, the Vatican said in a statement ahead of the trial.

"These serious allegations will be scrutinised by the competent judicial body, which will be assisted by both technical appraisals of the IT systems used by the defendant and, if necessary, international legal cooperation for the evaluation of testimonial evidence from the competent (Dominican) authorities."

According to the Italian-language weekly Panorama, the tribunal may request testimony from deacon Francisco Javier Occi Reyes, who was arrested in Santo Domingo accused of having put Wesolowski in contact with minors.

The case marks the first time a Vatican court will hear child sexual abuse charges against a former Church official.

But it is not the first time its legal process has been used to hear charges of alleged wrongdoing.

In 2012 the Vatican tribunal drew world-wide attention when it heard a case against Paolo Gabriele, Pope Benedict's former personal butler, for accusations he leaked secret documents to the press.

Alabama Gov. Kay Ivey hasn't made any recent public appearances, and her office is refusing to comment on rumors about her health.

The Alabama Republican, who is running for re-election in November, survived lung cancer three years ago, and AL.com columnist Kyle Whitmore reached out to the governor's office with a list of four questions seeking comment on her health and whether it affected her ability to carry out her duties, but he said they never replied and repeated attempts to contact Ivey herself and her aides went unanswered.

(Reuters) - Twitter Inc will revive features on the social media site to promote accurate information about the November U.S. midterm election and clamp down on false and misleading posts, the company said in a blog post on Thursday.