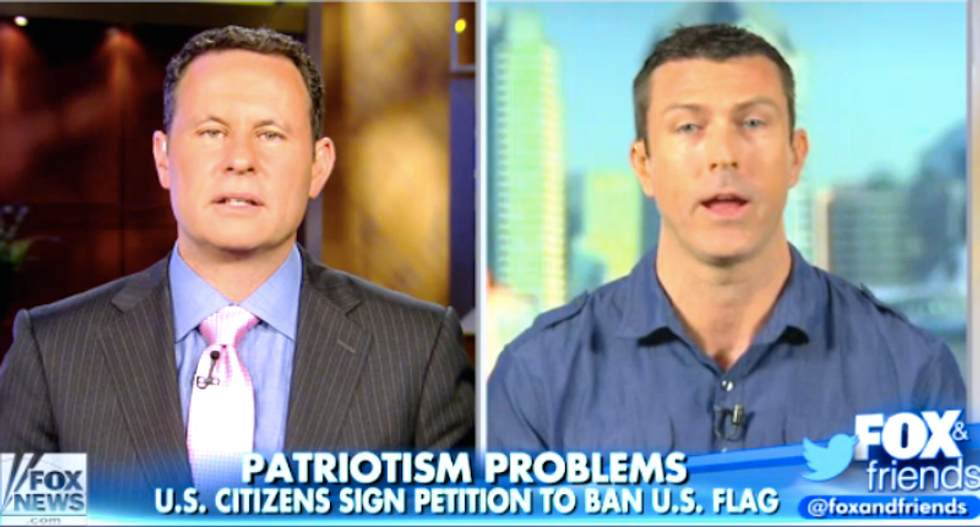 "Fox and Friends" hosted a 9/11 truther Tuesday who tricked California college students into signing a petition to re-design the “racist” American flag.

Mark Dice, who recently described reality TV star Kylie Jenner as the “Buddha” of the chemtrails conspiracy movement, was described by the conservative news network as a media analyst during the segment, reported Newshounds.

The conspiracy theorist said he watched public sentiment turn so quickly against Confederate flag displays, and he wanted to see whether “politically correct millennials” could be duped into banning the American flag.

Dice asks students if they would support a newly designed American flag, which he said President Barack Obama had requested, that would feature pro-LGBT, Masonic, and Illuminati imagery.

Fox News host Brian Kilmeade admitted the students had been duped, but he still fretted over their insufficient patriotism.

"Does this highlight a PC culture gone too far or just tell us how crazy people are on the West Coast?" Kilmeade said.

Dice said the “mentally enslaved morons” readily agreed to sign his petition because they had been "indoctrinated by their communist college professors, the liberal media, poisoned by pop culture to being ashamed of America and so afraid to be politically incorrect."

He has promoted other phony petition drives on Fox News about repealing various constitutional amendments.