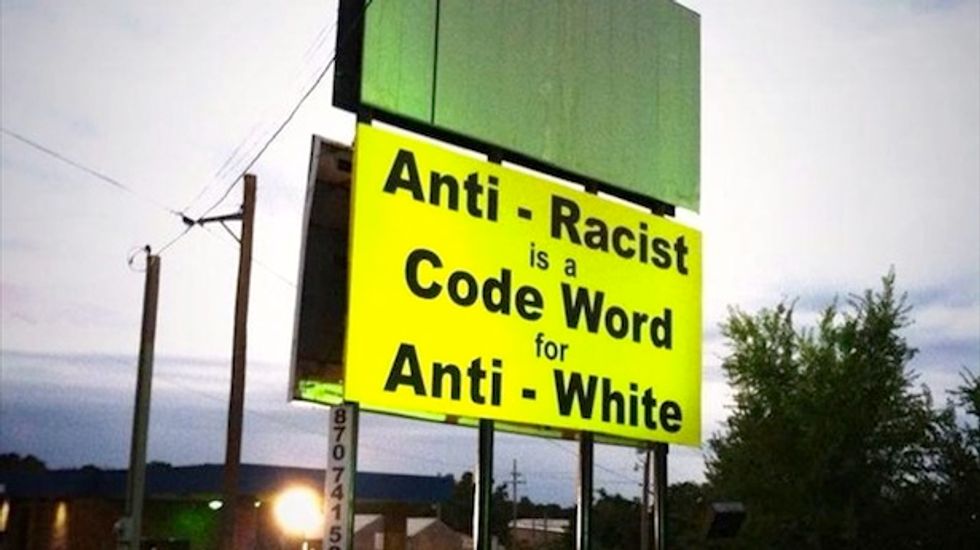 Another billboard in a series that have appeared across the South went up in Arkansas bearing the message "'Diversity' is a code word for #WhiteGenocide" this week.

According to the racist website bearing a suspiciously similar name, White GeNOcide Project, the person responsible for it remains anonymous.

The website quotes Robert Whitaker, a vice presidential candidate for the American Freedom Party, who is an "outspoken supporter" of the message.

"Just like Adolf, all they say is that I am daring to disagree with the Party Line. They never answer anything I say, they just demand that heresy be banned," Whitaker rants.

Whitaker runs a website on which he often rambles in all-caps about the imagined idea that "diversity" means a genocide of white people is afoot. In a recent post, he laid out an "equation:"

Similar billboards also have cropped up in states like Alabama and Tennessee. Earlier this year, a sign bearing the message "Diversity means chasing down the last white person" was erected in Alabama. In Tennessee, police removed vinyl banners from a freeway overpass bearing the same message as the current one in Arkansas.

A sign bearing a similar white supremacist message drew protests in Arkansas in 2013. The Raw Story has reported the phrase was attributed to "The Mantra," a bizarre treatise written by Whitaker that argues non-whites should return to the lands of their ancestors to protect whites.