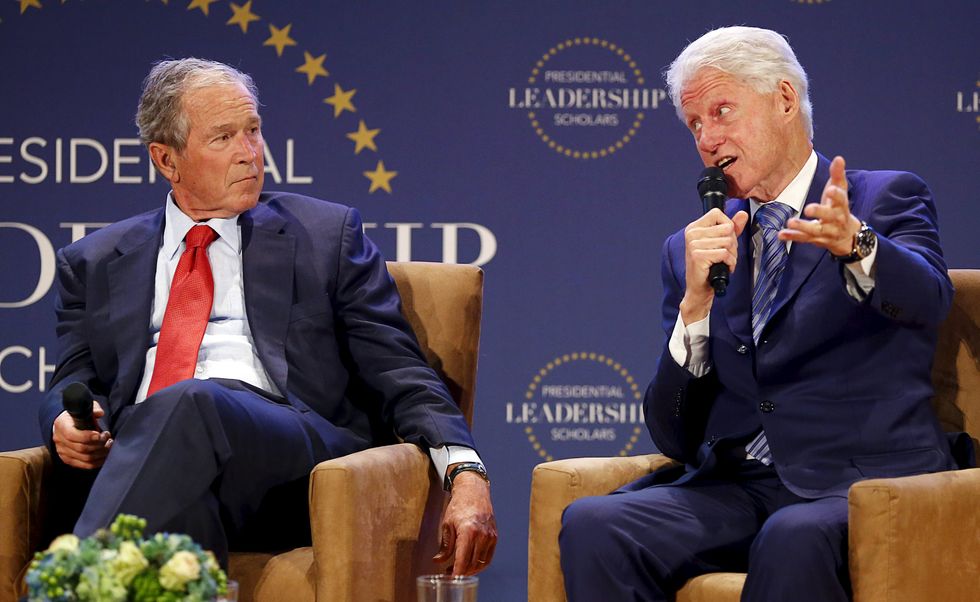 Former U.S. presidents George W. Bush and Bill Clinton shared a stage in Texas on Thursday to exchange quips and insights on leadership and hopes for an elevated tenor in the current presidential campaign in which their family members are running.

The two, who have become friends in retirement, told the graduation of the inaugural class of the Presidential Leadership Scholars program that failure is a part of life and to keep their ambition burning so that they can make a difference.

When it came to the presidential race in which Bush's brother Jeb is running on the Republican side and Clinton's wife, Hillary, for the Democrats, the former presidents said they wanted to see a substantive discussion of the issues facing the country and less focus on political gamesmanship.

"I know Jeb and I am confident that Secretary Hillary will elevate the discourse," Bush told the audience at his presidential center in Dallas.

"The American people expect (there) to be some sharp elbows in a campaign. What really discourages them post-campaign is the inability to govern in a way that is congenial," Bush said.

Clinton added he wanted to see frequent debates that allowed voters to see how the candidates would shape policy to tackle complicated issues.

Clinton also told the audience "the world belongs to tomorrow, not yesterday.

"Someday, for all of us, it will be our last day. What will matter will be all the steps we took along the way and what they amounted to," he said.

Bush responded: "I was stuck on that 'some day may be your last day' line. That was pretty damned profound."

Bush talked about the need to avoid the trappings of power and create an environment around leadership where "sycophants are not allowed in," adding Clinton told him to use big words.

Clinton replied that he did not know any big words, except perhaps "itinerant portrait artist," apparently referring to Bush's hobby of painting portraits since retirement.

The Presidential Leadership Scholars program is a partnership among the Bush, Clinton, Lyndon Johnson and George H.W. Bush presidential centers.