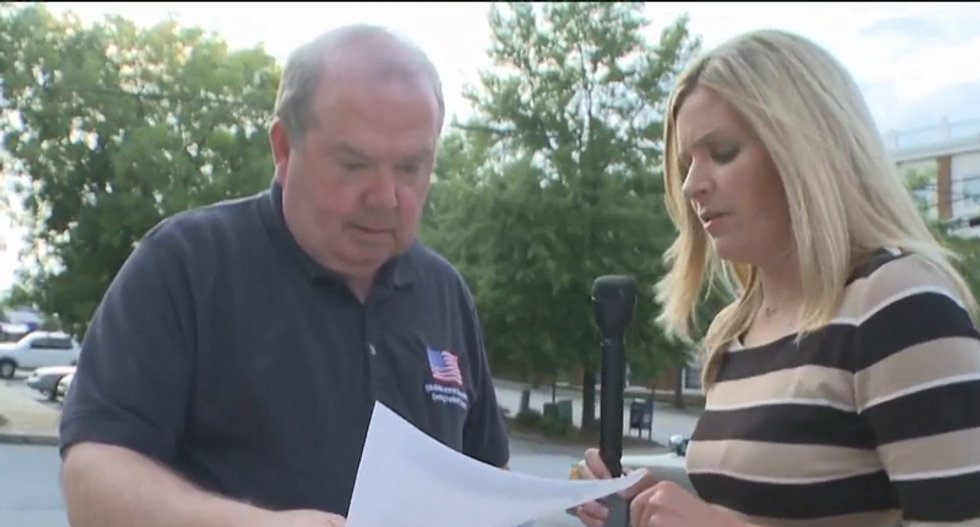 A Georgia county commissioner was initially unapologetic after posting a racist remark on a photo of an African-American woman desecrating the American flag, who was posting as part of the #NotMyFlag movement.

Newton County Commissioner John Douglas took to Facebook to respond to a photo of the woman giving the finger and wiping herself with the flag with the words, "She is just a cheap street walker knee grow who lays down for white men," according to local station WXIA.

When confronted by WXIA reporter Catherine Beck, Douglas at first said he didn't know how the comment got on his Facebook page. When pressed by Beck, he admitted he not only wrote it, but insisted he was right to do so.

When asked what his constituents would think, Douglas, who was wearing a polo shirt with an American flag emblazoned on it, responded, "I think my constituents would prefer to see us protect our flag. I am not proud that she stuck a flag up her butt."

When Beck pushed on, pointing out that Douglas had attacked the woman's race, not her action, he insisted, "I attacked her on sticking the flag up her butt... Look at her. She's got a flag stuck up her butt, and she needs to apologize for that. If she apologizes for that, I'll apologize for my comments."

He later said if he had to do it again, he'd "probably do the same thing."

An African-American military veteran and constituent told Beck the picture makes him angry, but Douglas' response makes him just as angry.

"You could either condone it or not condone it, but you shouldn't be going after people because of their color," he said. "That's very wrong."

By the time the WXIA segment aired, Douglas had backtracked, apologizing to the county commission for "insensitive and derogatory remarks," according to the Rockdale Citizen.

In his apology, posted to Facebook as reported by WXIA, Douglas apologized again, but urged the station to reach out to the "flag abuser" for balanced coverage.

Watch the report from WXIA here: