Geraldo Rivera clash with Eric Bolling nearly gets physical: 'I'd knock you out right now' 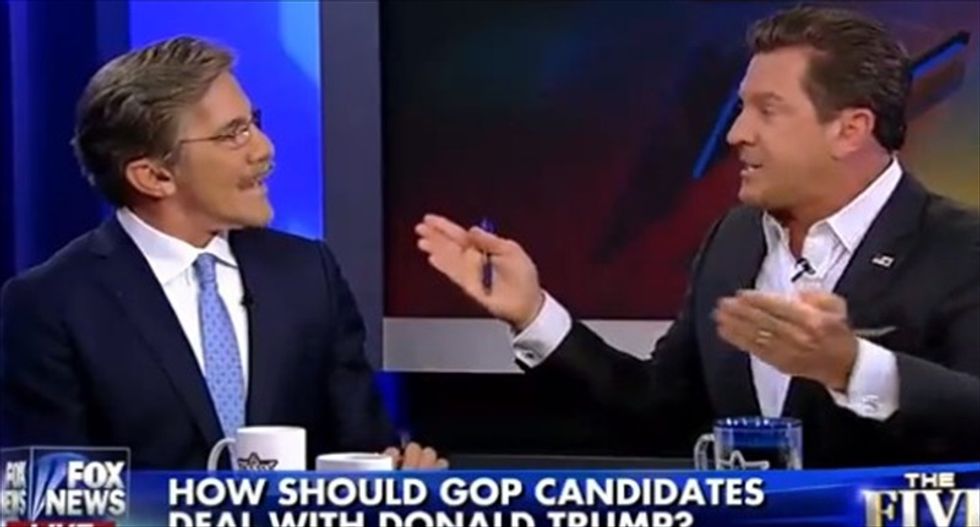 "It is exploiting and sensationalizing --" Rivera said before Bolling cut him off.

"From a guy who exploits and sensationalizes everything," Bolling retorted.

"Are you talking to me?" Rivera shot back. "You’re lucky that you're my friend. I'd knock you out right now. That's absolute BS."

"Well, we can take this up later," Bolling said, as Rivera fumed again that it was "absolute bogus BS."

"I exploit and sensationalize?" Rivera asked him. "What do you do? Where do you get your stuff from? What right-wing pundit has given you your script?"

The confrontation originated from a discussion concerning Republican presidential candidates and pundits taking shot at Trump, who is currently polling well among GOP voters.

"It's still early on," co-host Kimberly Guilfoyle pointed out. "They have to distinguish themselves among the available choices, make the case for themselves and say, 'Hey, choose me -- there's this guy and that guy, this is what's wrong with them,' and then you take down the real opponent."

"I wouldn't want to tangle with Trump, either," Watters said. "Then he'll just drop a nuke on you and you'll look like an idiot. He'll go after your looks, he'll go after anything. And you're just left there stuttering and it doesn't look good."

While the former reality show star may not win the party's presidential nomination, Watters added, Trump has "tapped into the red-blooded American bloodstream," saying that he was reaching voters who were displeased with the way a "skinny community organizer" was running the US, a veiled reference to President Barack Obama.

"That's how you refer to your president? A 'skinny community organizer'?" Rivera said. "That's disrespectful."

"I don't think so," Watters responded, before Rivera warned that Trump's remarks against Mexican immigrants would be like "a cheap drug."

"You get a big bang, a real quick high, and a very long hangover," Rivera said.

"It is the cheapest shot of all to exploit the misery of that family," Rivera said.

"You're exploring it by downplaying it," Watters told him, picking up on Bill O'Reilly's defense of Trump last week, which also used Steinle's killing in connection with Trump's remarks referring to undocumented Mexican immigrants as criminals.

Watch the confrontation, as posted by Media Matters on Monday, below.