‘Google Bilderberg’: InfoWars crew hits on reporter while getting the ’truth' on Rhode Island explosion 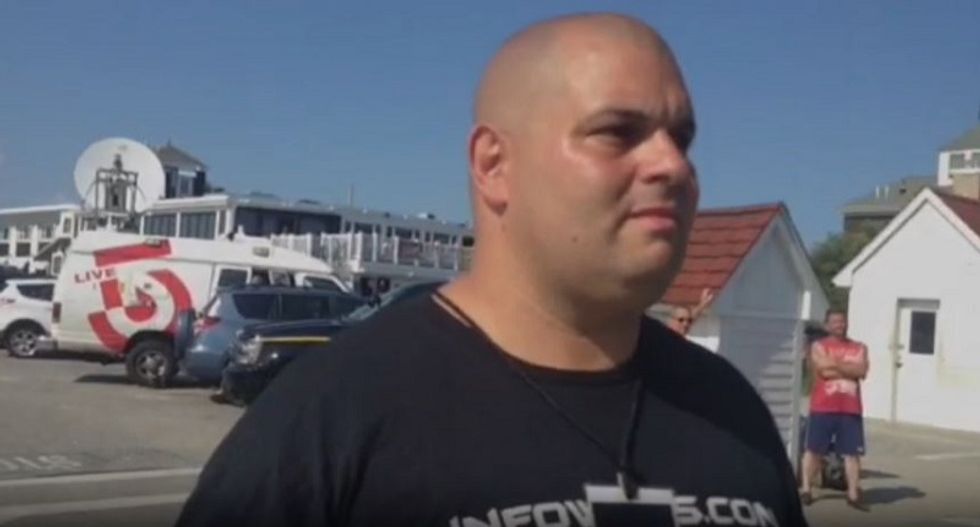 InfoWars reporter Dan Bidondi has released the following statement about this story: "Due to the rapid response time of the incident on the beach, my normal camera crew was unavailable. The camera man I used is NOT a employee or has zero affiliations with Infowars.com. His unprofessional actions do not speak for myself or that of Infowars.com. His services were terminated and was fully reprimanded for this most embarrassing unprofessional act."

A Rhode Island beach was evacuated Saturday morning after a yet-unexplained explosion occurred, injuring one woman.

Authorities closed Salty Brine beach while the state bomb squad investigated, the Providence Journal reports. A 50-year-old woman was taken to a nearby hospital after being hurt by the explosion. The cause remains unclear.

Alex Jones' conspiracy theory-oriented media enterprise InfoWars sent correspondent Dan Bidondi to the scene. Bidondi spent most of his time wandering around looking for someone to agree that the beach was being re-opened prematurely, but mostly found disinterest or even trolling from beach goers.

"Well what I think is, I heard the woman had a big burrito this morning from the restaurant," the man said.

Bidondi continued to press the man until he said dismissively, "yeah."

Bidondi and his cameraman weren't so concerned as to pass up a chance to hit on a female newscaster.

"Hey by the way, you are incredibly beautiful, is there any way I could just, like, marry you?" Bidondi's cameraman asks the reporter. "I'm a revolutionary myself... There's a lot of things that are going on in the mainstream media that's suspicious. I mean, what about the Bilderberg group, have you ever investigated the Bilderberg group?"

The reporter then turns and walks away with her cameraman as he continues to rant about the Bilderberg group.

Bidondi cornered another man and asked whether he thought opening the beach tomorrow would present a danger to the public because officials don't know whether it was a "terrorist attack."

"Well the beach is open this side over here, it's not that far away anyway, right?" the man responded.

"No but they're gonna open the whole beach," Bidondi pressed.

It was a calmer reaction than Bidondi got when he went to cover the Boston Marathon bombing for InfoWars. He was confronted by an angry Bostonian in April 2013 who unleashed in a profanity-laced tirade against his boss, Alex Jones.

"Why are you in my f*cking neighborhood? You're unwelcome in this motherf*cking neighborhood," the man demanded angrily. "Go tell everybody what you think... I'm sure everyone here loves to hear that the f*cking FBI blew up the Boston Marathon. You dumb*ss."

Watch Bidondi's livestream from Rhode Island and the angry tirade from the Boston resident below: