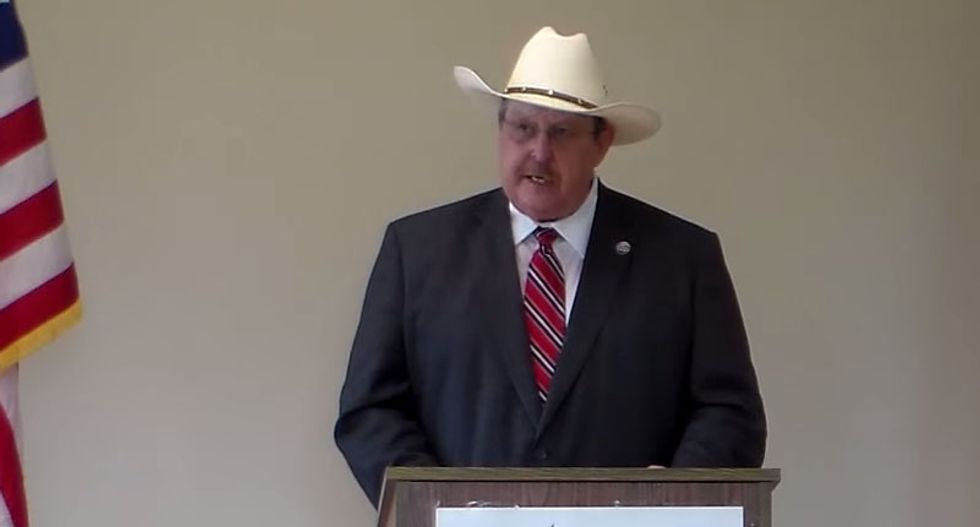 The legislative session may be over but state Rep. Cecil Bell Jr. isn't abandoning his crusade against gay marriage.

The Magnolia Republican did not — as he had teased — launch a bid for speaker of the Texas House on Monday. Instead, his much-hyped "major announcement" was a call for state and federal officials to resist "the rancid behavior" of the U.S. Supreme Court by impeaching justices who voted to legalize same-sex marriage, and ignoring the ruling itself.

Bell hinted last week he would address a potential speaker bid in his announcement, saying it “would be an interesting conversation on Monday.” Speaker Joe Straus, a San Antonio Republican, filed in June seeking a fifth term for the office; he is currently unopposed.

“That’s not the conversation for this day,” Bell said when asked on Monday about his possible candidacy.

At a press conference in Magnolia, Bell released his “PACT for the Constitutional Restoration of State Sovereignty,” essentially a manifesto listing broad ways for citizens and state and federal officials to come together and defy the Supreme Court ruling. Citizens should pressure elected officials to stop enforcing the ruling, and Congress should take action to impeach the five justices who voted to end state bans on gay marriage, Bell said.

“Our governors should join together in rejecting the striking down of state sovereignty,” Bell said in the announcement, “and should form a coalition standing between an overreaching federal government and the citizens of the separate states.”

The announcement is the latest step in Bell’s fight against the legalization of same-sex marriage. In the last legislative session, he authored a handful of bills that would prevent gay couples from marrying, including one that would pull the salaries of local and state officials who issued same-sex marriage licenses.

One bill, which would forbid the use of public funds to issue same-sex marriage licenses, had enough co-sponsors to guarantee it would pass if it reached the House floor. But Democrats prolonged debate to run out the clock and the bill wasn't heard before the deadline.

Naming Bell one of the "GOP rebel rousers," the Texas Democratic Party responded Monday by calling the "mean-spirited Tea Party base" out of touch with Texas values.

"If they want to ignore the Constitution, so be it," party spokesman Javier Gamboa said. "However, they took an oath to protect and defend the Constitution. If they don't want to, we urge them to seek another job."

Bell's initiative didn’t include any specific actions for how state officials should resist court rulings, saying that would be determined by state agencies.

States resisting Supreme Court rulings — and even the impeachment of justices — have precedent in U.S. history, Bell said, noting Justice Samuel Chase who was impeached in 1804 because some in the U.S. House of Representatives felt his political views were influencing his decisions. He was acquitted by the Senate the following year.

By Ally Mutnick, The Texas Tribune

This week's Raw Story Podcast welcomes the 45th President of the United States (in the form of comedian Phillip Wilburn). It's a rare opportunity to hear hosts Mike Rogers and Shannyn Moore grill a nationally elected "official."

The nationally-known Wilburn (If you've liked seeing Phillip on The Tonight Show, Jimmy Kimmel Live, and CONAN, you will love his chat with Mike and Shannyn.Mike and Shannyn on the Raw Story Podcast.