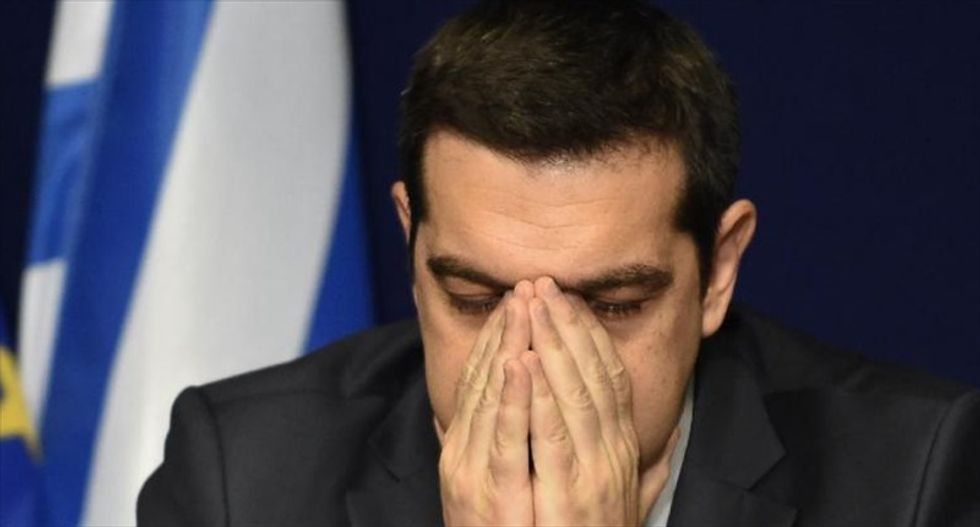 Greece's finance minister resigned Monday in what appeared to be a concession by Prime Minister Alexis Tsipras to international creditors after his resounding victory in a historic bailout referendum.

The shock announcement came as European leaders scrambled for a response after Greek voters said a resounding "No" to further austerity measures in return for bailout funds in a referendum that could see the country crash out of the eurozone.

"Soon after the announcement of the referendum results, I was made aware of a certain preference by some Eurogroup participants, and assorted 'partners', for my? 'absence' from its meetings," Varoufakis, who had often clashed with creditors in negotiations over the past months, said on his blog.

It was "an idea that the Prime Minister judged to be potentially helpful to him in reaching an agreement. For this reason I am leaving the Ministry of Finance today," he said.

The euro rose after Varoufakis's announcement, which was expected to renew hopes that the creditors -- the ECB, the EC and the International Monetary Fund (IMF) -- could be persuaded back to the negotiating table despite the country's decisive rejection of the reforms they were demanding in return for the release of a final tranche of bailout funds.

German Chancellor Angela Merkel was to meet with French leader Francois Hollande in Paris amid a flurry of other meetings to size up the implications of the vote, a victory for Greece's radical left-wing Tsipras, who insisted it did not mean a "rupture" with Europe.

With the ramifications still unclear and some analysts putting the chances of a "Grexit" at "very high", European Commission head Jean-Claude Juncker was to hold a teleconference on Monday morning with European Central Bank chief Mario Draghi, Tusk and Eurogroup head Jeroen Dijsselbloem.

Meanwhile German and French finance ministers were set for talks beginning in Warsaw at 0800 GMT, while the Euro Working Group of top treasury officials will meet in Brussels.

European leaders had reacted with a mix of dismay and caution to the figures released by the Greek interior ministry early Monday showing the final tally in the referendum at 61.31 percent "No" and 38.69 percent "Yes", with turnout at 62.5 percent.

Despite the Greek premier's assertions, new bailout negotiations now were "difficult to imagine", he said.

Dijsselbloem called the Greek "No" result "very regrettable for the future of Greece".

Britain vowed it would do "whatever is necessary" to protect its own economic security in light of the vote.

In Asian trade, the single currency held up against the dollar, after dropping in the immediate wake of the vote.

Shinya Harui, currency analyst at Nomura Securities in Tokyo, said the common currency was holding up as investors "assess the spill-over risks in case of a Greek exit from the eurozone", adding: "I personally think the chance (of the Greek exit) is very high, at around 70-80 percent."

In a televised address after the referendum, Tsipras insisted the vote did not mean a break with Europe. He has emphasised that euro membership is meant to be "irreversible", with no legal avenue to boot a country out.

"This is not an mandate of rupture with Europe, but a mandate that bolsters our negotiating strength to achieve a viable deal," he said.

Tsipras said the creditors would now finally have to talk about restructuring the massive, 240-billion-euro ($267 billion) debt Greece owes them.

Thousands of people in Athens gathered to celebrate the "No" vote Sunday night, punching the air, kissing and cheering.

"Spain, and then Portugal, should follow this path. We're for a Europe of the people," said Giorgos, 25, brushing off concerns the result could see the debt-laden country plunge further into the financial mire.

But the mood of jubilation was not shared by all "No" voters, with some saying they had been confronted with an impossible choice.

Greece is teetering on the brink of financial collapse. If it does not receive cash and loans soon from European institutions, it could be forced to resort to government IOUs or a return to the drachma to keep its economy running.

Last Tuesday, the country defaulted on a 1.5-billion-euro repayment to the IMF, becoming the first developed country to fall into arrears to the institution.

The same day, the last bailout for Greece ran out, despite Tsipras's appeals for it to be extended until the referendum was over.

Greece was officially declared in default on Friday by the European Financial Stability Facility, which holds 144.6 billion euros ($160 billion) of Greek loans.

Greek banks are now reportedly almost illiquid after a run by panicked customers in the lead-up to the referendum, which Tsipras abruptly called on June 27 to break an impasse with the creditors.

A weeklong closure of the banks and capital controls that included restricting daily ATM withdrawals to just 60 euros ($67) and blocking money transfers abroad slowed the outflow.

But if the ECB does not inject emergency euros into Greece's banks in the next one or two days, more businesses will go belly up and ordinary Greeks will suffer.

"The Greek 'No' puts the ECB in a most difficult position," said Berenberg Bank economist Holger Schmieding.

"Without a clear prospect of an immediate bailout deal that could prevent a full-scale sovereign default after Greece's de facto default on the IMF last week ... it is very hard for the ECB to authorise continuing emergency support for Greek banks, let alone to allow an increase in such support," the expert said.