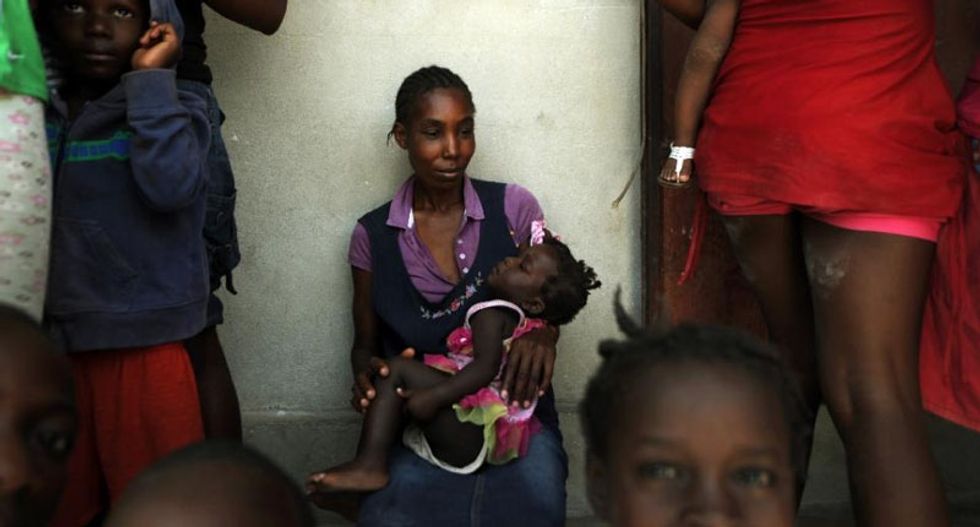 Beltha Desir wanders aimlessly around outside the school where she has taken refuge, holding tight to her 10-month-old child, the only family member with whom she was deported.

Desir, a Haitian woman, had lived for 10 years in the Dominican Republic, but immigration officers arrested her a week ago and sent her to the border, along with her Dominican-born baby.

"They told me: 'Go back to your country. Go find President Michel Martelly, we have no more need for Haitians. Whether you have papers or not, go home,'" she said.

The Dominican Republic gave undocumented immigrants, the vast majority of whom are from impoverished Haiti, until June 17 to register with the authorities or face deportation.

Since that date, 31,225 people had returned to Haiti as of July 1, according to Dominican figures.

Among those being expelled are people of Haitian heritage but born in the Dominican Republic, now being forced to relocate to a place where they have perhaps distant roots but often do not speak the Creole language, and have no known family.

The countries, which share the mountainous Caribbean island of Hispaniola, have a long history of animosity, cultural discrimination and racism.

Desir was detained in the city of Neyba where she worked, and didn't have time to tell her husband, who is also Haitian and was working only 50 meters (55 yards) away.

"I have three children, but the two biggest are with their father. They are five and six. How can they understand I am no longer with them?" she asked, with tears welling up in her eyes.

Disoriented, the 30-year-old woman said she can hardly sleep.

"It's been six days since I have seen my children and husband. He does not even know I'm here in Haiti. I couldn't even speak with him because he doesn't have a telephone," she said.

- 'Dominicans of a different blood' -

Repeating just one of the racist insults she suffered during the journey to the border, she said authorities told her "that Dominicans are of a different blood, and that I should go and find my blood in Haiti."

Beside her was Rose Hippolyte, who has suffered the same discrimination.

"When they see a Haitian, the Dominicans say 'Look at that pig, that Haitian devil,'" said Hippolyte, whose face is worn by years of work in the sugarcane fields.

"They treat us like animals. Sometimes, when you sit next to a Dominican, the person will move away so that you understand that he doesn't want your skin to touch his," she said.

In halting Creole -- the result of having spent only the first four years of his life in Haiti -- Francky Dorseli confirmed the abuse.

"The Dominicans mistreat the Haitians. They insult us each day, even sometimes the police," he said.

The 43-year-old, who was deported alone, has had no news from his wife and four children.

Just like Desir, Dorseli and all the others who have taken refuge in the community school in the small town of Fond Parisien, Hippolyte wasn't allowed to bring anything with her from home.

"I've worked since 1981 cutting sugarcane. I haven't earned much but I have managed to build myself a small home," said the 52-year-old Hippolyte, who arrived in the Dominican Republic at age eight.

"Everything remains there, I have nothing left. The pastor's wife gave me this dress to change into," she said, smoothing the fabric over her thighs.

The meager donations from the religious community and sporadic distributions from NGOs and ordinary citizens are not enough to provide the refugees with decent living conditions.

Dressed in dirty clothes that are often too large, several dozen children play jacks using pebbles. They gathered on a concrete slab under the absent-minded gaze of the tired women.

There is no water and no electricity. For two weeks, no doctor has passed through to see the families.

Nonetheless, none of the refugees wants to return to the Dominican Republic to face a barrage of insults and attacks. Living again in their original country, they hope to be able to bring their families to Haiti and live without depending on charity.

"I was a supervisor in a textile factory and also a supermarket cashier," Desir said.

"I do not want money or food but a job to be able to bring my children and my husband here so we can live together peacefully," she said.