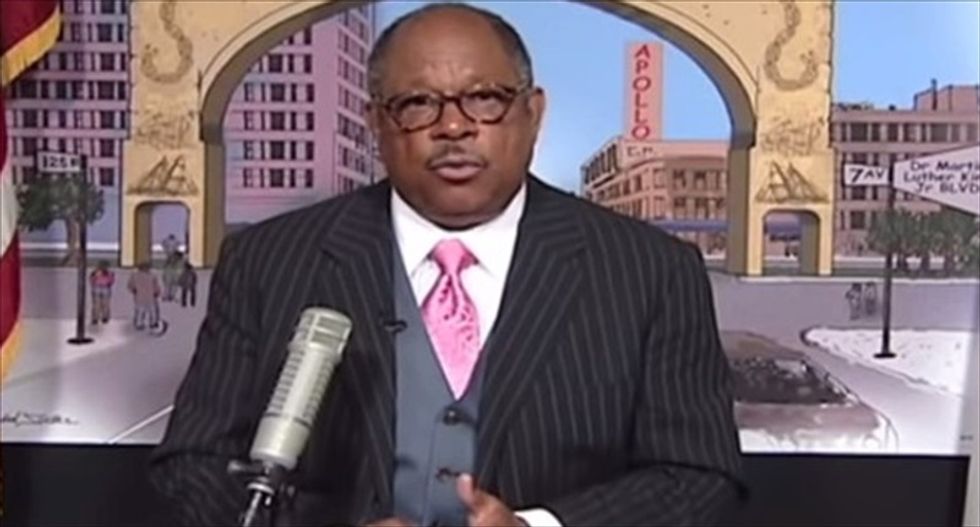 Anti-LGBT pastor David James Manning boasted on Tuesday that the legalization of same-sex marriage would spur a new Civil War -- and that he would be on the winning side, Right Wing Watch reported.

"The nation must be rescued from the liberal God-haters and Constitution-haters and those that are pushing this sodomy agenda," Manning said on Tuesday. "America will be rescued and the rescuers will be the Confederates, the Southerners, those that have been the blood-washed, blood-bought, Bible-believing, locked-and-loaded. I'm James David Manning, and I want to be one of them. I'm the Lord's servant."

Manning's apparent admission that he is a secessionist comes on the heels of the announcement that he would take part in an event hosted by the Oath Keepers militia group on Saturday in Gettysburg.

Instead of worrying about terrorist groups like the Islamic State, Manning said, Americans should be concerned about seeing the Confederate flag flying above not only the White House, but state capitols as well.

"That is more real than your breakfast cereal," he said.

Late last year, Manning, who leads the ATLAH Worldwide Missionary Church in Harlem, attracted attention onto himself for pushing the debunked claim that the Starbucks coffee shop chain was using semen taken from "sodomites" for their drinks.

"Starbucks will be found to be perverting its customers and perverting human sexuality," Manning said at the time. No such discovery was ever made.

Watch Manning's latest commentary, as posted online on Thursday, below.