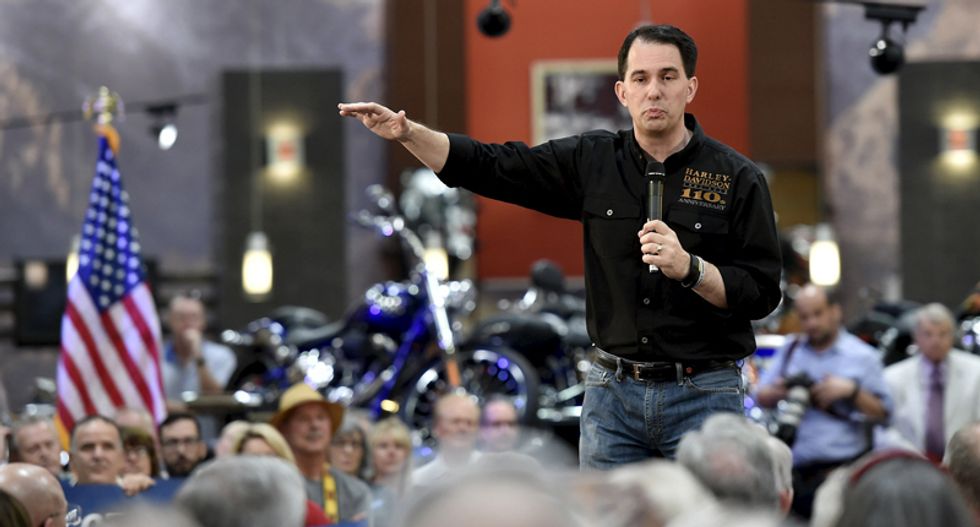 For Wisconsin Governor Scott Walker, there's something awkward about the Harley-Davidson motorcycles that he has been posing on at presidential campaign stops: each one bears a sticker on its frame that reads "Union made in the USA."

Walker has made the iconic American brand a centerpiece of his campaign kick-off tour this month, visiting four dealerships and sometimes showing off his own 2003 Harley Road King as he seeks to harness its appeal to older white male voters.

But there is another side to Harley that the Republican candidate has been less vocal about - it is a leading example of a successful company that has a strong relationship with labor unions.

Walker, by contrast, has made his union-busting credentials the foundation of his White House bid, touting it as the prime example of his leadership success and as evidence of how he can defeat powerful vested interests and even foreign enemies.

It's not clear how he can reconcile his love of the powerful, deep-rumbling bikes known as "hogs" with the strong union loyalties of those who build them.

Some of the people who build Harleys - more than a thousand of whom are unionized workers in Wisconsin - are fuming over Walker's prominent use of the bikes in his campaign.

"He's trying to make a name for himself by saying 'I took on 100,000 union workers' - and he's on our bikes," said Andy Voelzke, 57, who works at Harley's plant just outside Milwaukee and is a member of the United Steelworkers union.

"It's just such a contradiction."

As governor, Walker passed legislation over strong Democratic opposition to limit collective bargaining for state employees. He took another swipe at organized labor this year with a bill that forbids unions within private firms from forcing workers to pay dues.

Like other candidates in the crowded Republican primary field, Walker is hoping to connect with voters in the "Harley-Davidson" demographic, jokingly referred to as "old fat guys" and who are perceived to be mostly conservatives.

Walker may already have some ground to make up among Harley lovers. Ten out of a group of 11 riders approached by Reuters in downtown Milwaukee on Tuesday named front-runner Donald Trump as their early favorite in the race for the Republican nomination.

Seven of the riders, none of whom were from Wisconsin, said they hadn't heard of Walker.

Harley’s unions in Wisconsin could be affected by Walker's "right to work" reform passed this year. Voluntary membership could leave unions with less money to pay for negotiators and lawyers. The company will also have more power to fire employees for not agreeing to additional tasks, such as overtime shifts.

"Governor Walker believes individual workers should be free to decide on their own – without the influence of union bosses – whether they’d like to join a union and pay dues and that’s why he signed a law making Wisconsin a right-to-work state," said AshLee Strong, a spokeswoman for Walker's campaign.

A spokeswoman for Harley-Davidson, which has enjoyed solid global sales and whose share price has doubled over the past five years, declined to comment, saying its management wanted to remain neutral.

Harley-Davidson's relationship with its workers' unions isn't just decent; it's studied as an example of how corporations can benefit from organized labor.

"They've had disputes in the past, but Harley has never tried to kill the union and the union has always taken the attitude that it wants Harley to succeed," said Paul Osterman, a professor at Massachusetts Institute of Technology's Sloan School of Management.

"It's a successful example of labor-management cooperation."

Flags representing the United Steelworkers and the International Brotherhood of Machinists fly alongside the U.S. flag and Wisconsin's state flag at the entrance to Harley's plant on Pilgrim Road, just outside the Milwaukee city limits. Harley's global headquarters is in the city.

The union is credited in the Harley-Davidson museum in Milwaukee, which is run by the company, for helping to save the firm from bankruptcy in the early 1980s.

The two sides haven't always gotten along. There have been worker strikes as recently as 2007, and Harley has experimented with efforts to offshore parts of its production.

But employees interviewed by Reuters said the company has, within the past five years, repatriated some production after workers argued it would improve efficiency.

Among the Harley riders interviewed by Reuters, Walker had a fan in William Welp Jr., 60, a retired Navy commander who now teaches at a public high school in Fort Lauderdale.

"When I first heard Scott Walker and saw him I thought: 'There's a guy who thinks just like I do,'" said Welp, who had ridden from Florida with three of his friends.

Welp said he had already donated to Walker and was against unions, even though he joined one voluntarily.

Erin Spengler, 40, a Harley rider who works at Pilgrim Road, described her anger when, in 2013, Walker climbed on a Harley to lead a motorcycle rally as part of Milwaukee's Military Appreciation Day Parade.

Spengler was supposed to participate, but at the last minute, she said, decided to stay home.

"I am not going to let this guy lead me through town like a circus when he's against everything I stand for," she said.

After Roe v Wade, here’s how women could adopt ‘spycraft’ to avoid tracking and prosecution

The art of concealing or misrepresenting one’s identity in the physical world has long been practised by spies engaged in espionage. In response, intelligence agencies designed techniques and technologies to identify people attempting to hide behind aliases.