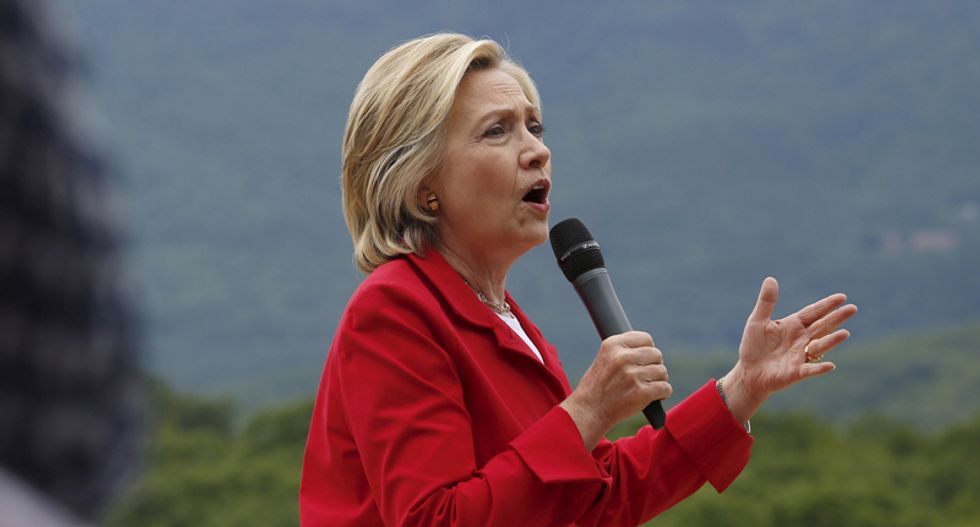 U.S. Democratic presidential candidate Hillary Clinton accused China on Saturday of stealing commercial secrets and "huge amounts of government information," and of trying to "hack into everything that doesn't move in America."

Clinton's language on China appeared to be far stronger than that usually used by President Barack Obama's Democratic administration.

"But we also have to be fully vigilant, China's military is growing very quickly, they're establishing military installations that again threaten countries we have treaties with, like the Philippines because they are building on contested property," said Clinton, who was secretary of state from 2009 to 2013.

"They're also trying to hack into everything that doesn't move in America. Stealing commercial secrets ... from defense contractors, stealing huge amounts of government information, all looking for an advantage," she said.

Clinton is the front-runner to win the Democratic nomination for the November 2016 presidential election.

Asked about the remarks, a White House official declined to comment.

In the most recent case involving suspicions of Chinese hacking, Obama administration officials have said China is the top suspect in the massive hacking of a U.S. government agency that compromised the personnel records of at least 4.2 million current and former government workers.

China has denied hacking into the computers of the U.S. Office of Personnel Management.

Clinton also addressed the current talks over Iran's nuclear program and had strong words for Tehran.

She said that even if a deal is reached with Iran, Tehran's "aggressiveness will not end" and it will remain a principal state sponsor of terrorism.

Clinton said she hoped that "a strong verifiable deal" would be reached at talks in Vienna between world powers and Iran.

The United States, other world powers and Iran have set a July 7 deadline to reach a deal to curb Tehran's nuclear program in exchange for a lifting of sanctions that have crippled Iran's economy.

At the campaign event, Clinton also said the United States has to be "much smarter" about how it deals with Russian President Vladimir Putin's territorial ambitions.

She said Putin's moves to expand Russia's boundaries, such as the annexation of Crimea last year, posed a challenge for the United States but she touted her experience as America's chief diplomat.

She noted that because of NATO members' agreement to protect fellow members, had Ukraine been a member of NATO when Crimea was annexed, "that would have caused us to have to respond."

She added on Putin: "I've dealt with him. I know him. He's not an easy man ... But I don't think there is any substitute other than constant engagement."