Historian Jelani Cobb on racism denial: 'unless you are an actual 2015 slave owner, you don't qualify as racist' 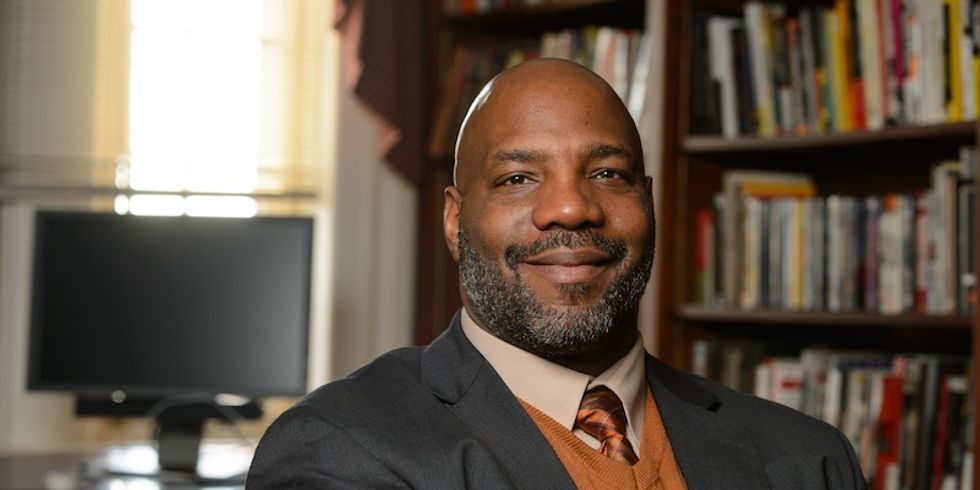 A recent CNN/ORC poll  found that the majority of Americans still believe that the Confederate Flag is a symbol of Southern pride and not racism. Among the 1,017 people polled, 57% saw the flag as an expression of pride. Not surprisingly, more white participants, 66% of them, considered the flag to be about Southern pride, while only 17% of the Black participants did. 27% of the white participants and 75% of the Black participants  saw the flag as racist. That's a pretty big discrepancy. It must be that a lot of Black people are delusional and/ or Highly Sensitive Persons. Or it could be that a lot of white people don't understand or pretend to not understand racism. I'm going with option two.

Jelani Cobb, a professor of History and the director of the Africana Institute at the University of Connecticut, and a staff writer at The New Yorker, spoke about the distortion of the Confederate Flag, of history, and of the very definition of racism, when he was a guest on my WBAI radio show on Wednesday:

we have engaged in what I called a translucent lie. We know what the symbol [the Confederate Flag] is and we know the circumstances under which the symbol came into existence. When people would say this is heritage, not hate I would always respond by saying what makes you think those two things are mutually exclusive?  Because the racial hatred that we're talking about is a cornerstone of the heritage that people are trying to avoid or the heritage that people are trying to photoshop. Why does the Confederate flag have the appeal that it has to right wing, white supremacist organizations? If this is in fact about such a benign southern heritage, then why do we see it cropping up in such close proximity to organizations that are avowedly racist.

Cobb's point about the white supremacist tendencies found among the most avid defenders of the Confederate flag reminded me of Anna and Nathan Robb, the married couple of Branson, MO, who own Dixie Outfitters, which sells confederate souvenirs, T-shirts and memorabilia. Business at Dixie Outfitters is booming now that retailers like Walmart, Amazon, Sears and eBay have stopped selling Confederate flag merch. Anna is adamant that there is nothing racist or hateful about her store's confederate tchotchkes. (A tchotchke is the Yiddish word for a trinket. Cobb and I decided it was probably not kosher to combine "confederate" and "tchotchke" but let's file it under subversive.)  Instead, insists Anna, her store is about

Southern pride, history and heritage... Our customers are hardworking, red blooded Americans that understand the history of the Confederate flag. They are not haters or anything like that... They are proud of their country and proud of what the Confederate flag represents. It has nothing to do with the slavery issue.

What Anna is less than forthcoming about, however, is her connection to the Ku Klux Klan. Her father-in-law, Thomas Robb, is the national director of the KKK offshoot The Knights. Her husband and store co-owner, Nathan, once tried to adopt a highway in Arkansas on behalf of the Klan. And Anna herself attended Klan events, but that's such old news, she explains: “I have years ago... That was years ago, and that is not even something that comes up anymore... It has nothing to do with me, the store or this issue at hand." Yeah, guys! Shut up, already! Mind your own business! Gosh! Get a life!

Cobb  said that "one of the reasons we're even able to have this ridiculous discussion is that the idea of what constitutes racism has become so malleable." He pointed to the example of comedian Michael Richards. In 2006, during a standup set that was not going over very well in New York City, Richards called a Black audience member the n-word several times and said, “Shut up! Fifty years ago we’d have you upside down with a f****** fork up your ass."

Yet, on the Late Show with David Letterman, Richards insisted, "I'm not a racist. That’s what’s so insane about this.” Cobb finds this claim of non-racism puzzling,

Well, you just called someone that word 10 or 12 times... You meet the minimum bar [to be characterized as racist]. So, I guess today, people are saying that unless you have to file on your tax returns that you own someone, unless you are an actual 2015 slave-owner, then you don't qualify as a racist.

Listen to the rest of the interview with Cobb below (16:33-26:35) in which he discusses the value of symbolic victories and what he hopes President Obama will do to honor the memory of State Senator Clementa C. Pinckney, one of the nine people killed at the Emanuel AME Church in Charleston, S.C.

On the same episode of The Katie Halper Show we are joined live in studio by Pablo Benson Silva who talks about the debt crisis in Puerto Rico, Giovanni Zelko who talks about his film The Algerian, Andrew Kirell  who talks about Islamophobia. Gabe Pacheco and I discuss the rent freeze and how we  coincidentally ran into Jimmy "The Rent Is Too Damn High" McMillan on our way to a comedy show which we were doing with with The Metropolitan Council on Housing. I'm an atheist, but the fact that Jimmy McMillan, whose iconic image and one-liner I used in the flyer about the show, was eating pizza around the corner from the very same  show makes me believe in god. Almost... Listen to what Jimmy has to say about the rent freeze and why he wears his gloves.