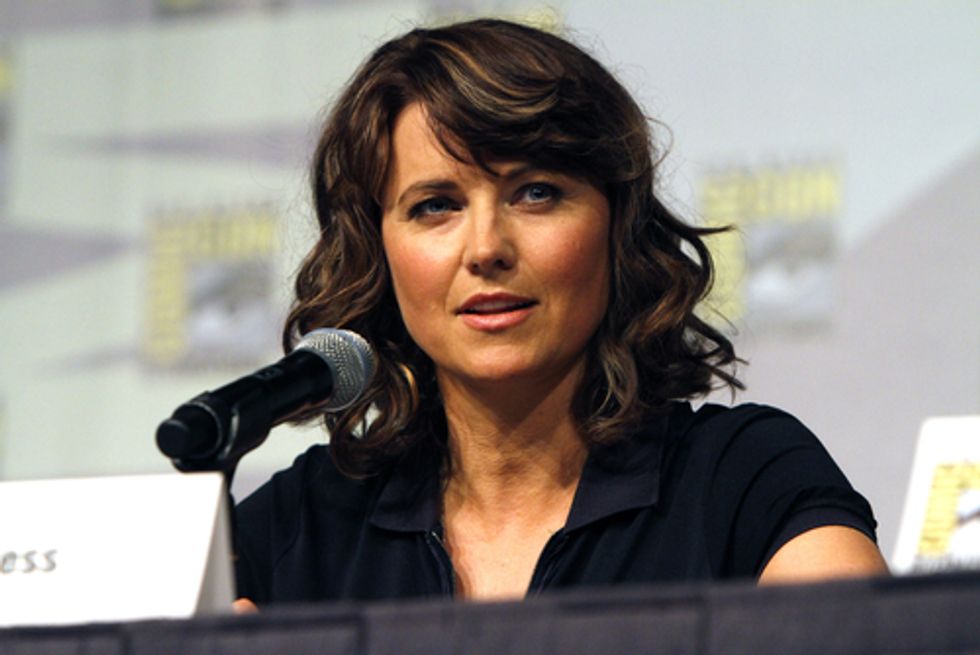 Hollywood Reporter leaked a rumor that there's talks about a reboot of Xena: Warrior Princess. Lucy Lawless tweeted that it's "just a rumor" but hinted that it might be a little more by adding, "it's still in the wishful thinking stage." Sounds like fishing to me, so I went ahead and bit with a Slate piece about why I love this idea.

But I do have to be a total geek about this and forward one major concern I have, a concern that was provoked by a great piece in Time by Kareem Abdul-Jabbar about the range of "acceptable" bodies in our current media climate. Abdul-Jabbar protests a media climate where being a muscular woman is considered so unfeminine that even female athletes are castigated for building muscle, which he suggests is because "the muscular, athletic woman symbolizes physical and mental self-sufficiency, which threatens the cozy ideal of beauty as soft, fragile, and weak."

Outside the fanboy world of Xena: Princess Warrior and Wonder Woman, a muscular woman is generally not the ideal," he adds. When I read that, I started laughing, because even his exceptions show how right he is. Or at least when it comes to Wonder Woman, anyway. While Wonder Woman should be a tall, strong woman---fuck, she's literally supposed to be an Amazon---fanboy and ruiner of all things good and true in the world Zack Snyder decided to cast a rail-thin woman in the role for Batman v Superman.

This isn't about picking on Gal Gadot. Any actress would jump at the part and I'm sure she's busting her ass on this. This isn't about her in particular or thin women in general. This is about Hollywood being so allergic to women with even the slightest bit of muscle mass. There are plenty of parts for lanky women like Gadot, so why not give a part that should be tailor-made for a heftier form to someone who has that?

Anyway, so that leaves me a little worried. If they do get this Xena remake off the ground, it would be great if they could not Snyder this one up. Let her have some muscles! Women deserve to have the big-and-strong kicking ass and taking names fantasy, too, you know. That's part of what made the original Xena fun, and it helped that Lawless was plausible as a warrior who could swing a sword and go toe-to-toe with strong men. There's just so much pressure in Hollywood to only cast women who are physically unthreatening to fragile male egos, of the sort I am forced to imagine your typical Hollywood executives have, and I'm sick of it. Again, this isn't saying that there should never be short women or thin women onscreen. But there should also be tall, strong women and fat women and a variety of women. Xena should look physically imposing! This is not too much to ask. Get this one right, Hollywood. And, while you're at it, remember that Captain Marvel is supposed to be tall and broad-shouldered, too.