Hundreds of lawyers back Moroccan women on trial over 'indecent' outfits 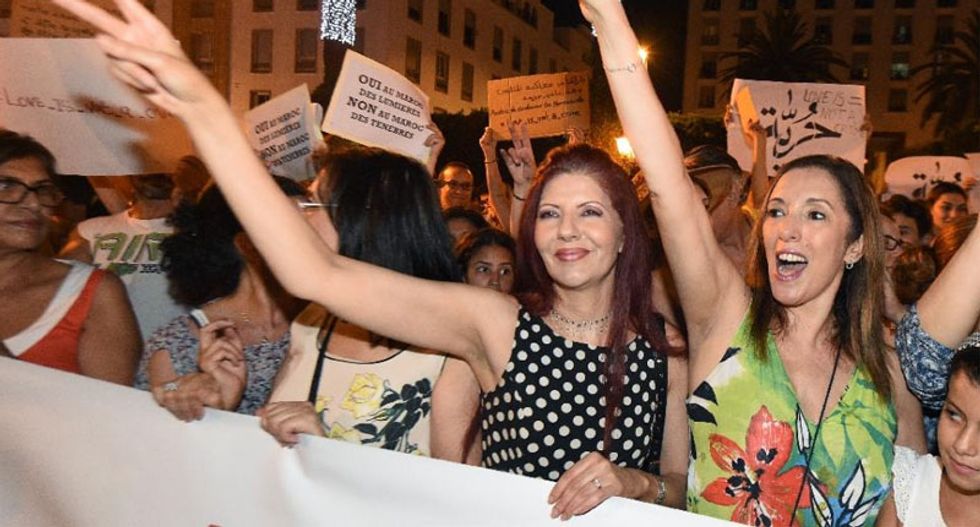 Moroccans shout slogans and hold placards during a demonstration in Rabat on July 6, 2015, against the arrest of two Moroccan women after their outfits were deemed inappropriate as they strolled through an open-air market in the city of Agadir (AFP Photo/Fadel Senna)

Hundreds of lawyers have registered to defend two women who went on trial in Morocco on Monday accused of "gross indecency" for wearing dresses considered provocative, an activist said.

The move came as protesters took to the streets of the capital, Rabat, in support of the defendants.

The women were arrested in the southern city of Agadir in mid-June after walking through a marketplace in the dresses, sparking anger among passers-by in the conservative Muslim kingdom.

The verdict is to be delivered on July 13, said Fouzia Assouli, head of women's rights organisation LDDF.

The two women, hairdressers aged 23 and 19, were charged with "indecent exposure" for which they could face up to two years in prison.

They have been backed by hundreds of lawyers, many of whom appeared in court on Monday, said Assouli.

"Five hundred lawyers registered to defend the two women, but because of restricted space in the courtroom, only 200 were able to attend" the hearing, she told AFP.

The lawyers took turns to put forward arguments in the case, she said.

One of them, Sibai Bakar, said the trial was a "chance for our country to amend its laws to conform with its commitments to human rights and especially individual freedoms."

Rights organisations have denounced the trial and protests have been held in support of the women in the capital, Rabat.

In the police report, the women were said to have been wearing clothes that were "too tight".

Article 483 of Morocco's penal code states that anyone found guilty of committing an act of "public obscenity" such as "gross indecency" can be jailed for between a month and two years.

The case comes amid growing calls for "morality" to be respected in Morocco, which has been frequently criticised by international groups for rights abuses.

Last month, pop star Jennifer Lopez sparked anger among conservatives in Morocco -- and triggered much debate -- for being, according to media, "scantily" dressed during a concert in Rabat that was broadcast on public television.