'I am not a racist': Prison guard suspended one day for Facebook 'joke' about lynching Obama 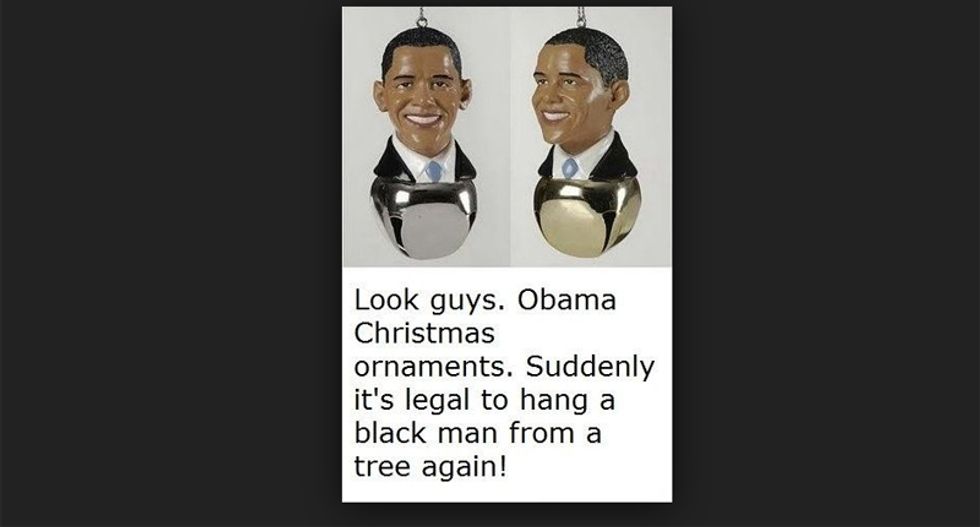 A Wisconsin prison guard who posted a joke on Facebook last year featuring a Christmas ornament of President Obama with a joke about lynching a black man, received a slap on the wrist with a 1-day suspension reports the State Journal.

Visser, who is employed as a correctional facility in Waupun, shared the picture in the comments section of a newspaper’s Facebook post about a Black Lives Matter rally in Cedar Rapids, Iowa.

Last week the State Journal discovered that Dodge Correctional Institution Warden Marc W. Clements told Visser in January that he would be suspended for one day and required to attend diversity training for what Clements called a “serious act of misconduct.”

Visser was found to have violated four department work rules including those relating to harassment and exercising good judgment.

“Your use of social media in this demeaning and derogatory manner is not only a reflection of you but on every DOC staff member,” Clements told Visser in a letter dated Jan. 28. “It runs counter to every part of our mission and cannot be tolerated.”

In a written statement, Visser told investigators he “meant no harm” when he posted the image and asked to be allowed to keep his job.

“I meant it as a joke,” he said. “When I looked back at it, I realized that it was stupid and I deleted it.”

“I am not a racist,” Visser reportedly told investigators.