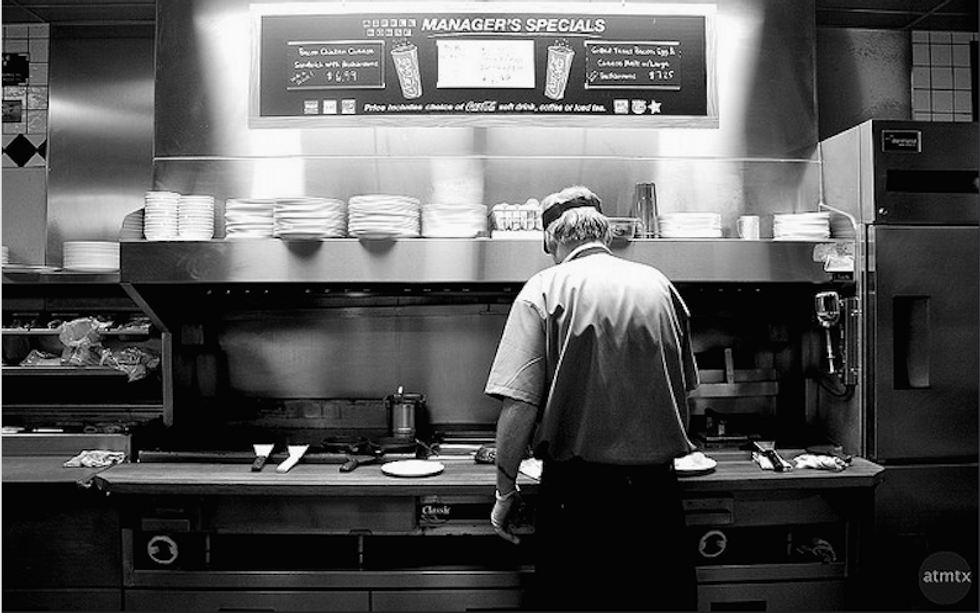 The reason the US is in an economic rut? Americans aren’t working enough hours, Jeb Bush, a Republican frontrunner and 2016 presidential hopeful, explained last week.

The “only way we’re going to get out of this ” Bush spelled out, is “to be a lot more productive”: “People need to work longer hours and, through their productivity, gain more income for their families.”

Not everyone agreed. The remarks have caused a backlash from Democratic quarters in particular, with members of the Hillary Clinton team pushing back that Americans needed to be paid more, not work more hours.

Bush later clarified that his remarks were taken out of context – he was referring to the millions of underemployed. According to the Bureau of Labor statistics, there are 6.5 million involuntary part-time workers. “People want to work harder” to avoid “having to depend on government”, he said.

So which one was it? Was his reasoning as foolproof as it seemed?

I headed to Central Park in New York on a summer afternoon, a place I thought I might catch some of those daydreamers who refused to get a job. After failing there, I headed to the Upper West Side, where I asked those New Yorkers who were not rushing to a work appointment and had time for me: is all you’ve been waiting for an opportunity to work more?

Ann Aptaker, a writer and adjunct professor who would only reveal her age in code (“let’s just say I recently received my Medicare card”), says she works between 60 and 80 hours a week.

If only working more meant earning more money, she mused. She still hustled to make rent working the extensive hours she did.

Aptaker spoke as she was waiting for a friend. They were going out for dinner, which was something she rarely did, she said.

Why was going out so uncommon? “I don’t have much time to socialize,” she said. “And because I can’t afford it.”

Toni Flores: I work 80 hours a week to survive and I am exhausted

Toni Flores, 38, was taking in some sunshine with his companion on Monday. It was a precious moment: this was his single day off for the week.

“I think I work more than enough, because I have two jobs. I work full-time at the Japanese restaurant and then I work part-time on Saturday and Sunday,” he said.

Flores says he works 12 hours Tuesday through Friday, and then 16 hours on Saturday, and 16 hours on Sunday. That’s an 80-hour week.

“It’s only like this that I can survive. Life is expensive. I have to take care of everything, pay rent, bills ... You have to work hard for that.”

Here, then, was one of those people Jeb Bush wanted more of: hard workers.

Does Flores feel happy and fulfilled? A proud man fulfilling his American duty to the economy, as laid out in Bush’s strategy? Not really.

“I think I want to quit my part-time job, maybe at the end of the year. It’s been almost four years like this. It’s too much for me.”

All things considered, what he’d really like would be able to afford to work less, he said.

Kirby Koo: it’s all about balance

Kirby Koo, 26, works for a software company, and has a side gig as a yoga teacher. She says she is content with her working hours.

She works 40 hours a week in her marketing and technology field, and is given the flexibility she requests when she needs it.

On the side and on weekends, she pursues her passion, which is in “wellness”, and involves yoga photo shoots and special projects, including yoga lessons. That “doesn’t feel like work” though, she said, smiling.

Kevin Forrest: yes, please, I would love to work more!

He gets one day off a week, he says, but finds those days boring. He’d love to get another job. That is, providing the pay was right.

But it didn’t seem to make sense after a while.

Scott Ramsdell: I object to the methodology of your statement

Scott Ramsdell, 57, objected to the lack of specificity in Jeb Bush’s comments. He thought being invited to work more could mean a number of things, and our definition of work should be broadened to include non-remunerative categories.

“The context of work seems to be ill-defined,” the events planner, who works 40 to 45 hours a week in his “primary” position, reflected.

Ramsdell is also on the board of a non-profit.

“You could say: should I get more exercise? Well, yeah. That’s something we could all do. Should I spend more time reading? Should I be working more on my education, my intellect? Some people would consider that work,” he said.

“I think he [Jeb Bush] means just work harder for the same amount of pay and the economy will improve. Which is lame.”

Mai Alhjouj: I get half an hour off a day. That’s not enough to fit in a formal job

Mai Aljouj, 29, says she would love a job, but the half an hour she has free in between all of her work at home is spent catching up on the news and on Facebook.

“My day is too busy. Taking care of the children, cooking, laundry, everything. Everything …”

The mother of two hopes to join the formal work force once her young children are in school.

“That would come from someone whose family didn’t have to work. That’s the only people that would think that ordinary citizens should work more,” Cornwall said.

The issue was finding time for people to actually spend time with their families during the working week – the problem was definitely not a reluctant workforce, he said.

“The idea that most Americans don’t do enough: it’s ridiculous, because we’re the ones who keep the country moving,” he said.

But Cornwall was hardly surprised at Bush’s comments.

“You grow up in that 1%, and of course you’re out of touch. What more would you expect?”

Duane Peek: my only time off is when my daughter is sleeping

Duane Peek, a 48-year-old full-time dad, says his day is full from 7am to 8pm: the hours during which his daughter is awake.

The two were walking through Central Park on Monday late afternoon. “Although excitingly beautiful, she has no end to energy,” Peek said, before interrupting himself, turning to his left and shouting.

“Sam! Come back.” Little Sam had ventured up into the woods.

“Do I have more hours? Only if she’s sleeping”.

She returned in time for their interview photo.