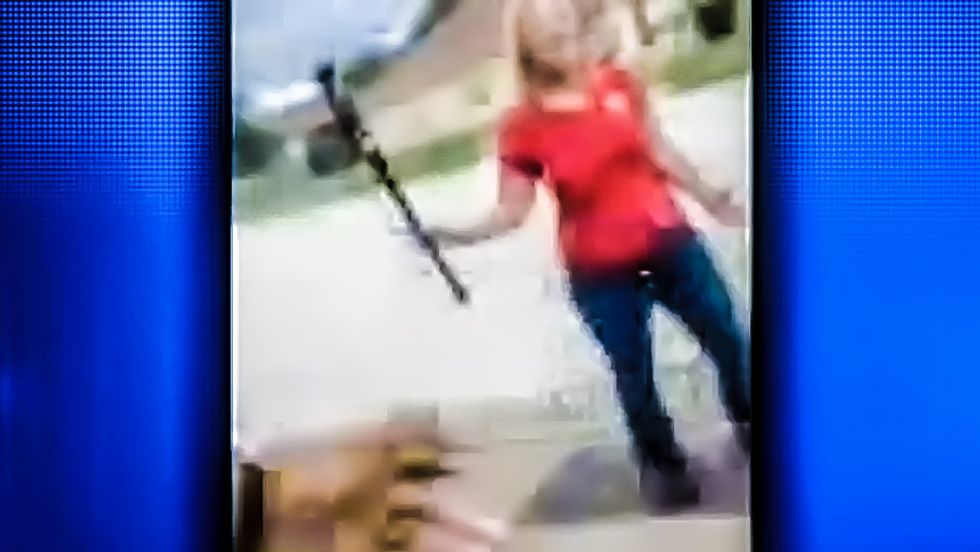 A Florida woman was facing multiple charges after she was recorded on video shouting racial slurs and chasing black children with a baseball bat -- but her husband said that she did nothing wrong.

According to The Orlando Sentinel, a 16-year-old resident of Lake County told deputies that that 29-year-old Lisa Marie Elberson chased him down a street in their neighborhood with a baseball bat and spat on him and his friends during an argument on Sunday.

A report filed by the Lake County deputies said that the incident began with a dispute between Elberson's husband and one of the teens, which later escalated when Elberson picked up a black Louisville Slugger and began chasing the kids.

Video recorded by one of the teens showed Elberson shouting racial and homophobic slurs.

"I'll hang your family from my tree," she said at one point.

Elberson's husband told WFTV that his wife used the n-word but he insisted that she never did anything wrong.

The husband said that his wife had taken the bat from his son to prevent it being used against the teens.

"So he wouldn't hurt the boy, to make sure that everything was safe, and that all that was going on was to talk," he argued. "He really doesn't have nothing on her. He don't have nothing. All he has is my wife yelling at him. And that's all she did."

The video, however, convinced Lake County deputies that a crime had been committed.

Deputies showed up at Elberson's job later that evening and arrested her on charges of aggravated assault with a deadly weapon, child abuse and simple battery. Bond was set at $5,000.

Watch the videos below from WFTV.