Illegal fireworks eyed as cause of California fires 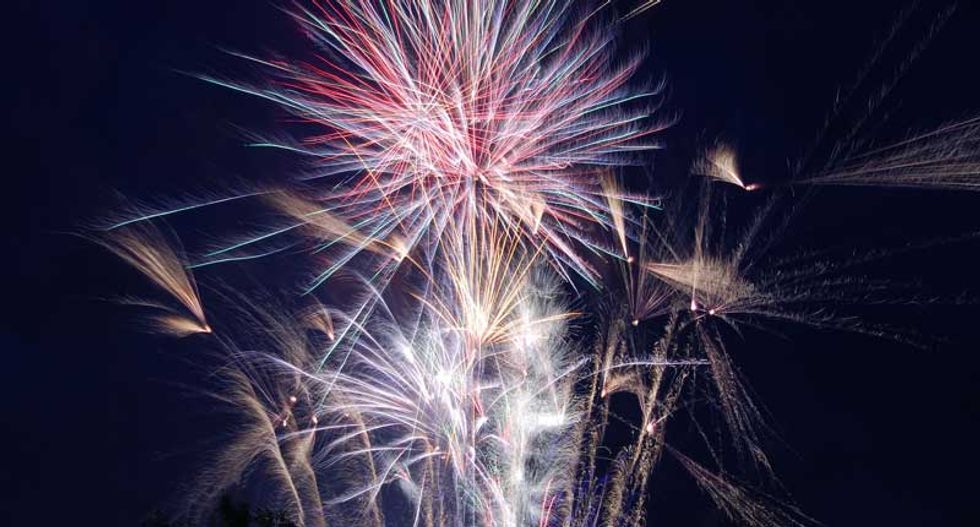 "4thFireworks1" by UpstateNYer - Own work. Licensed under CC BY-SA 3.0 via Wikimedia Commons.

Three fires that broke out on the July Fourth holiday in California were possibly sparked by the use of illegal fireworks and a man was arrested after fireworks exploded at a party and injured several people, officials said on Sunday.

The Hollister Police Department said 35-year-old Shawn Gregory Bourdet was arrested after he lit a firework mortar that fell on its side and shot projectiles at celebrants at a block party late on Saturday.

At least five people were treated at area hospitals, with injuries ranging from a possible broken leg to severe burns. A child was airlifted to a San Francisco Bay Area hospital with severe injuries, the police department said.

The Los Angeles County Sheriff's Department said in a statement that witnesses reported seeing a group shooting fireworks into a mattress outside a Los Angeles warehouse that eventually went up in flames. Fireworks debris was found on the scene.

The blaze spread to two other warehouses, causing as much as $3 million in damage, and injured four firefighters, the department said.

A brush fire in Santa Clarita, some 30 miles (48 km) north of Los Angeles, grew to cover about one acre before it was put out by firefighters, according to the department. There were numerous reports of fireworks in the area around the time of the fire, officials said.

About 55 miles (89 km) north of San Francisco in the city of Vacaville, officials said fireworks were suspected in starting a 325-acre fire that prompted about 125 people to evacuate from their homes.

City officials said no structures were lost in that blaze, which was contained, and no immediate reports of injuries.

Investigations into the three separate blazes were ongoing.

The fires came as authorities battling dozens of large wildfires along the parched U.S. West Coast clamped down on holiday fireworks displays over fears that wayward sparks could trigger fresh blazes.