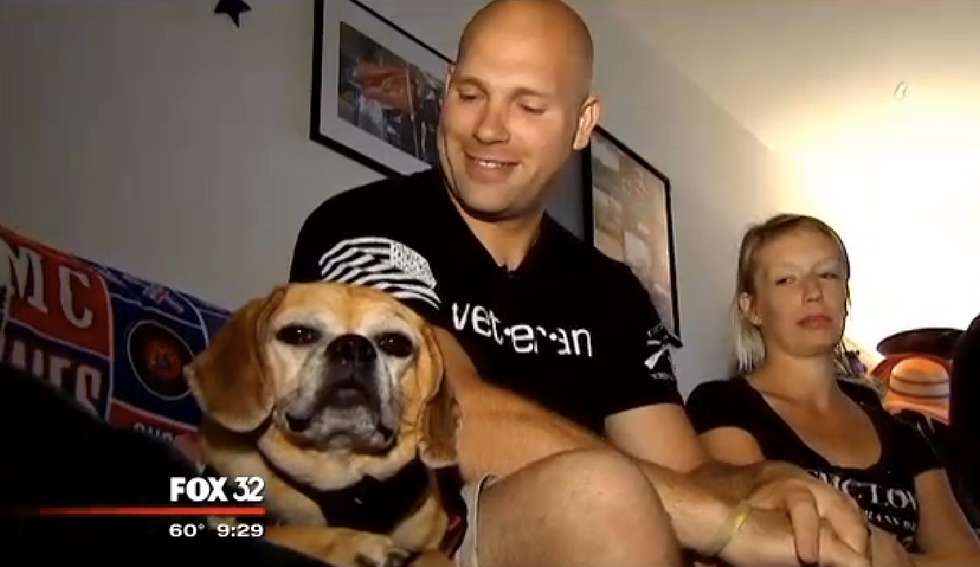 A Chicago veteran who suffered brain injuries in Iraq says that his service dog is the reason the family's landlord is refusing to renew their lease.

According to Fox 32 TV, ex-Marine Jon Jans believes that his family is the victim of housing discrimination.

Jans has lived in the apartment for four years, but on Monday, the family received a letter telling them that when their lease expires in 60 days, they have to move out. No reason was given.

Jillian Jans, Jon's wife, said that she's certain it's because of Jon's therapy dog, Allie. The Manchester Court subdivision where they live has a "no dogs" policy. Service dogs, however, are allowed.

But since a new property manager took over in recent months, the Jans feel like their dog isn't welcome.

Due to his injuries, Jon needs emotional support when venturing into crowds and other unpredictable situations.

“We had a lot of suicide bombers, and I don't do well in crowds or big groups of people, and that's one of the big things she helps me with. To go out,” he told Channel 32.

“She's been a godsend. He was on 18 medications when he got out of the Marine Corps. He was on nine when we first got her. He's on six now. So that's a huge difference,” Jillian said.

However, a Manchester Courts Supervisor told Fox 32 in an email that "maintenance technicians have seen dog feces and smelled dog urine in the Jans apartment on multiple occasions."

Also, despite warnings, "This Jans family continued to let their dog out unleashed and unsupervised to defecate as it pleased."

“I have never had a problem with this dog once. Inside or outside of any establishment,” he said.