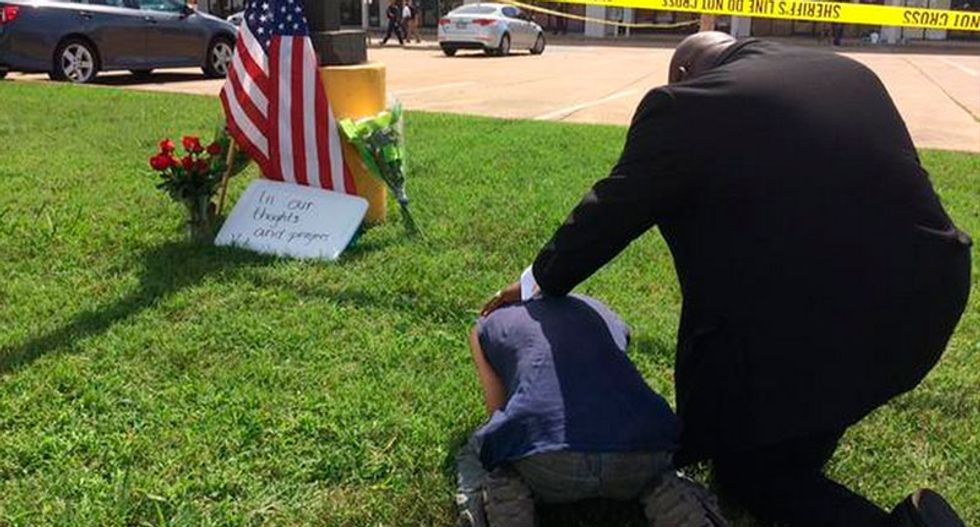 A man prays over a sobbing citizen next to a U.S. flag at the site of a shooting attack on a Naval recruiting center in Chattanooga, Tennesse July 16, 2015. REUTERS/WTVC-TV NewsChannel 9/Alyssa Spirato

Investigators on Friday sought to determine what led a 24-year-old gunman to open fire at two military offices in Chattanooga, Tennessee, killing four Marines in an attack officials said could be an act of domestic terrorism.

Mohammod Youssuf Abdulazeez, identified as the shooter by the Federal Bureau of Investigation, was shot to death in the rampage that also injured three people, including a sailor who was critically wounded.

The attack comes at a time when U.S. military and law enforcement authorities are increasingly concerned about the threat "lone wolves" pose to domestic targets.

The suspect, seen driving an open-top Ford Mustang, first went to a joint military recruiting center in a strip mall and sprayed it with gunfire, riddling the glass facade with bullet holes.

"Everybody was at a standstill and as soon as he pulled away everyone scrambled, trying to make sure everyone was OK," said Erica Wright, who works two doors down from the center.

The gunman then drove off to a Naval Reserve Center about 6 miles (10 km) away, fatally shooting the four Marines before being shot and killed in a firefight with police.

Three others were wounded in the attacks, including a police officer reported to be in stable condition and a Marine. The shootings began around 10:45 a.m. (1445 GMT) and ended about 30 minutes later.

NBC News reported that Abdulazeez was a naturalized American who was born in Kuwait. U.S. law enforcement officials said they were investigating whether he was inspired by Islamic State or a similar group.

Islamic State had threatened to step up violence in the holy fasting month of Ramadan, which ends on Friday evening.

The extremist group, also known as ISIS and ISIL, claimed responsibility when a gunman in Tunisia opened fire at a popular tourist hotel and killed 37 people in June. On the same day, there was an attack in France and a suicide bombing in Kuwait.

At a news conference late Thursday, Edward Reinhold, special agent in charge of the FBI's Knoxville, Tennessee, division, said investigators had found nothing that tied the suspect to an international terrorist organization.

Nobody else had been taken into custody, he said.

The SITE Intelligence Group, which tracks extremist groups, said that Abdulazeez blogged on Monday that "life is short and bitter" and Muslims should not miss an opportunity to "submit to Allah." Reuters could not independently verify the blog postings.

The New York Times, citing unnamed law enforcement officials, reported that his father had been under investigation several years ago, over possible ties to a foreign terrorist organization. His name was later removed from a terror watch list.

According to a resume believed to have been posted online by Abdulazeez, he attended high school in a Chattanooga suburb and graduated from the University of Tennessee with an engineering degree.

"I remember him being very creative. He was a very light-minded kind of individual. All his videos were always very unique and entertaining," said Greg Raymond, 28, who worked with Abdulazeez on a high school television program.

"He was a really calm, smart and cool person who joked around. Like me, he wasn’t very popular so we always kind of got along. He seemed like a really normal guy," Raymond said.

Mary Winter, president of the Colonial Shores Neighborhood Association, said she had known Abdulazeez and his family for more than 10 years and was stunned.

"He never caused any trouble," she said. "We can't believe that this happened."

President Barack Obama offered his condolences to the victims' families and said officials would be prompt and thorough in getting answers on the shootings.

"It is a heartbreaking circumstance for these individuals who have served our country with great valor to be killed in this fashion," he said in a statement from the Oval Office.

The Department of Homeland Security was stepping up security at certain federal facilities and supporting the FBI investigation, DHS Secretary Jeh Johnson said in a statement.

Media in Chattanooga, a city of about 173,000 people along the Tennessee River in the southeast of the state, said memorial services for the victims would be held in various churches.

The Department of Defense will decide whether to release the names of the victims, federal officials said.

An autopsy will determine how Abdulazeez died.

"We condemn this horrific attack in the strongest terms possible," said Nihad Awad, national director of the Council on American-Islamic Relations.

There have been other attacks on U.S. military personnel in the United States.

In 2009, former U.S. Army major Nidal Hasan fatally shot 13 people at Fort Hood in Texas. He said he targeted unarmed soldiers preparing for deployment in retaliation for U.S. wars in the Muslim world.

And in May, two gunmen opened fire with assault rifles at a heavily guarded Texas exhibit of caricatures of the Prophet Mohammad. Both men were shot to death by responding authorities.

An elections administrator in Bexar County, Texas says that she and her colleagues feel constantly under siege from pro-Trump election deniers who are accusing them of rigging the 2020 race against the former president.

In an interview with local news station KSAT, Bexar County Elections Board Chairman Jacque Callanen detailed how suspicious Trump supporters have flooded her office with not only threats, but also unreasonable records requests that could force the office to hire more people just to handle them.

One week after the FBI raid on his Mar-a-Lago mansion Donald Trump on Monday made what appear to be false allegations against the FBI, claiming the Bureau "stole" his passports in "an assault on a political opponent." That same day he gave an interview to Fox News repeatedly mentioning the "anger" he says stretches across the country over federal agents' execution of a lawful search warrant and confiscation of 20 cartons of materials that include highly-classified documents, while wrapping that in an offer to "do whatever" to help.

Monday evening Politico reported that FBI agents had taken Trump's passports – swept them up unintentionally. The passports were found by a "filter team" that goes through everything that was confiscated to ensure items like privileged attorney-client communications are not assessed or included as part of their investigation.