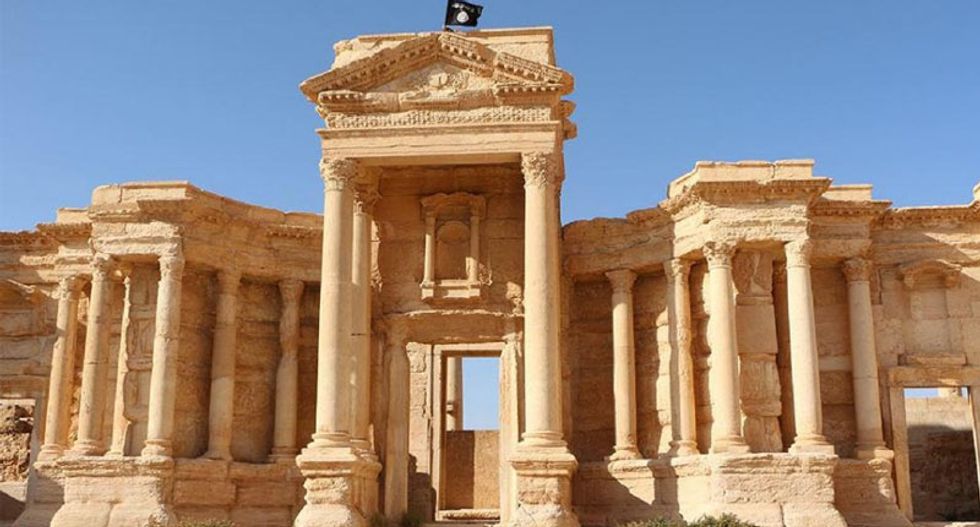 An image made available by Jihadist media outlet Welayat Homs on May 28, 2015 allegedly shows a flag of the Islamic State group fluttering atop the circular wall bounding the orchestra at the Roman theatre of the ancient city of Palmyra (AFP Photo/)

Islamic State group jihadists have destroyed a famous statue of a lion outside the museum in the Syrian city of Palmyra, the country's antiquities director said Thursday.

Maamoun Abdelkarim said the statue, known as the Lion of Al-Lat, was an irreplacable piece and was apparently destroyed last week.

"IS members on Saturday destroyed the Lion of al-Lat, which is a unique piece that is three metres (10 feet) tall and weight 15 tonnes," Abdelkarim told AFP.

"It's the most serious crime they have committed against Palmyra's heritage," he said.

The limestone statue was discovered in 1977 by a Polish archeological mission at the temple of Al-Lat, a pre-Islamic Arabian goddess, and dated back to the 1st century BC.

Abdelkarim said the statue had been covered with a metal plate and sandbags to protect it from fighting "but we never imagined that IS would come to the town to destroy it."

IS captured Palmyra, a renowned UNESCO World Heritage site, from government forces on May 21, prompting international concerns about the fate of the city's antiquities.

So far, the city's most famous sites have been left intact, though there are reports IS has mined them.

Most of the pieces in the city's museum were evacuated by antiquities staff before IS arrived, though the group has blown up several historic Muslim graves in recent weeks.

Also on Thursday, the group released photos showing its members in Aleppo destroying several statues from Palmyra that were being smuggled through the northern province.

"An IS checkpoint in Wilyat (region of) Aleppo arrested a person transporting several statues from Palmyra," the group said in an online statement.

"The guilty party was taken to an Islamic court in the town of Minbej, where it was decided that the trafficker would be punished and the statues destroyed."

Abdelkarim said the busts "appear to be eight statues stolen from the tombs in Palmyra."

"The destruction is worse than the theft because they cannot be recovered."

IS's harsh version of Islam considers statues and grave markers to be idolatrous, and the group has destroyed antiquities and heritage sites in territory under its control in Syria and Iraq.

On Wednesday, the head of the UN cultural organisation UNESCO urged a campaign against IS's "culture cleansing."

"Extremists don't destroy heritage as a collateral damage, they target it systematically to strike societies at their core," Irina Bokova said in a speech at the Chatham House think tank in London.

"This strategy seeks to destroy identities by eliminating heritage and cultural markers."