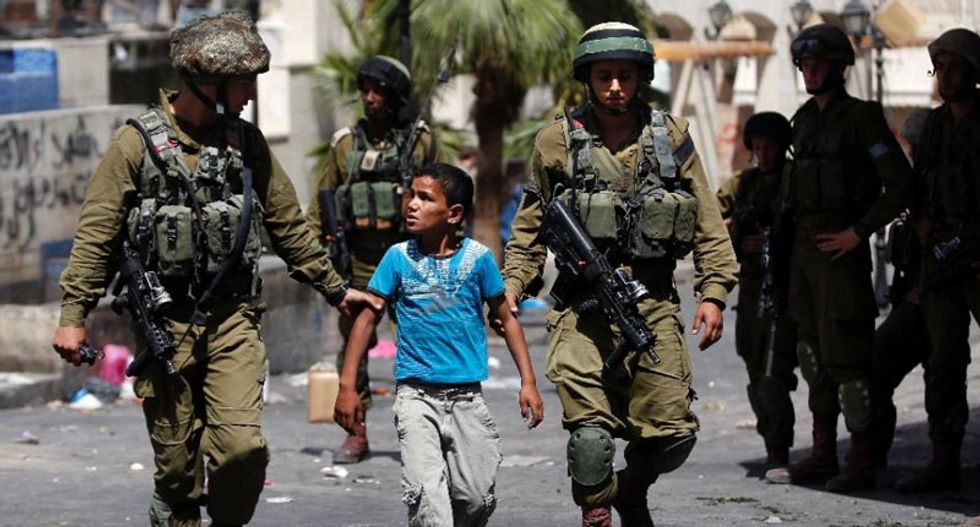 Human Rights Watch on Monday accused Israel of "abusive arrests" of Palestinian children as young as 11 and of using threats to force them to sign confessions.

The rights group issued the accusations as US Defence Secretary Ashton Carter began a visit to Israel.

"Israeli security forces have used unnecessary force to arrest or detain Palestinian children," it said in a report giving details of the "abusive arrests" of six children.

"Forces have choked children, thrown stun grenades at them, beaten them in custody, threatened and interrogated them without the presence of parents or lawyers, and failed to let their parents know their whereabouts."

Israel's army, when contacted by AFP, had no immediate comment on the report.

HRW said the military and justice ministry responded to its accusations and maintained that "security officials had adhered to the law in all cases, including by informing the children of their rights".

In one case, 11-year-old Rashid S, who was arrested in Israeli-annexed east Jerusalem in November, said officers put a bag over his head, kicked him and verbally abused him in Arabic, according to the rights group.

Rashid was accused of throwing stones during the months of unrest that rocked Jerusalem before and after a deadly July-August war in the Gaza Strip.

The Jerusalem riots, where security forces clashed with stone-throwing Palestinians, were accompanied by a spate of killings of both Jews and Arabs.

In the West Bank, 14-year-old girl Malak al-Khatib was violently arrested on suspicion of throwing stones at a road used by Jewish settlers, HRW quoted her mother as saying.

"Four soldiers beat her with something like a baton" during Malak's arrest until she lost consciousness, mother Khoula said.

"While on the ground, they kicked her and one soldier stepped on her neck."

In every case HRW documented, the Palestinian families said Israeli authorities "did not inform parents of the child's arrest and interrogated the children without permitting them to speak to a parent or lawyer prior to the interrogation".

Three children "said they signed confessions written in Hebrew, a language they do not understand, after interrogators threatened them".

Children urinated on themselves out of fear during the arrests, and had nightmares afterwards, it said.