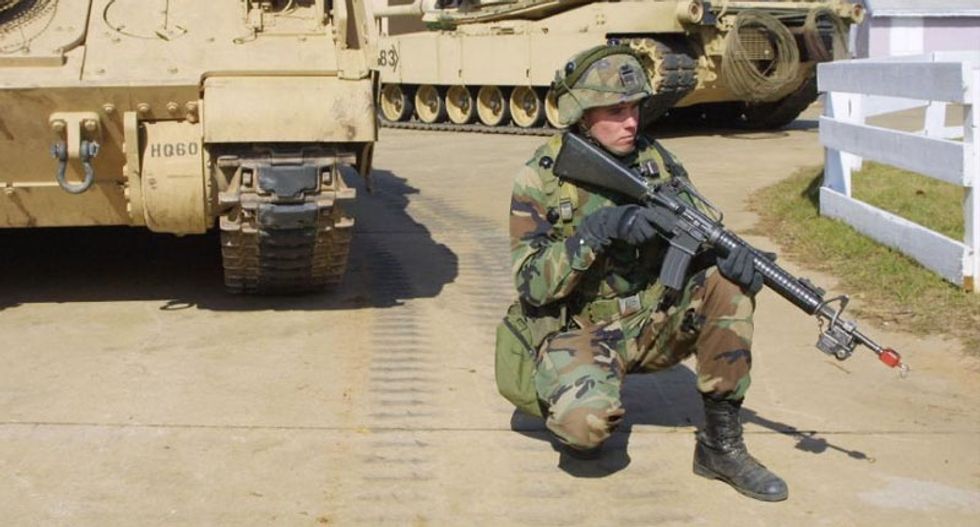 The conspiracy theories grew wilder as the massive military exercise grew closer: food riots and martial law were coming to the United States, some said.

Dissidents would be assassinated, Wal-Marts turned into prison camps, foreign troops brought in to help.

Then the governor of Texas lent credence to the paranoia by ordering the state's National Guard to monitor a weekslong special operations training exercise called Jade Helm 15 involving 1,200 troops and seven states.

Some people reportedly buried their guns so government troops couldn't take them away. Others stockpiled ammunition and supplies.

Jade Helm began last week not with a bang, but a whimper.

Bastrop, Texas -- the scene of a rowdy public meeting where people held up signs declaring "no Gestapo in Bastropo" and wore t-shirts with the words "come and take it" under a drawing of an automatic rifle -- was eerily calm on the third day of the exercise.

Nobody seemed to have seen any of the troops, or the out-of-town conspiracy theorists who vowed to watch their every move.

"We haven't gotten a single call," said Steve Adcock, chief of police in the town of about 7,000.

"We thought that there might be something, but nothing's occurred."

Local officials and some residents resent the attention the protests have drawn.

Bastrop is just a few miles from Camp Swift, a National Guard storage and training facility.

People who live here are strong supporters of the military, Adcock said. He didn't recognize any of the people who angrily challenged an Army colonel at April's rowdy public meeting.

"A lot of the conspiracy stuff is not local people," Adcock told AFP.

"It's making us look really bad."

"If you talk to 10 people about it, only one of them will even raise an eyebrow," she said. "We have a bunch of fringe elements in the county and they squawk pretty loud."

But while the wildest theories like how the government is building re-education camps for Christians, libertarians and other "enemies of the state" may seem outlandish, the underlying fear is widespread.

Some 60 percent of Americans see the government as a "threat to individual liberty," according to a poll conducted by Rasmussen in May.

Two thirds of respondents said they were concerned the government will use military training operations "to impose greater control over the states" yet, oddly, only 16 percent opposed having these exercises in their state.

The Army spent months trying to reassure people that the public would experience "little disruption" to their normal lives aside from "a slight increase in vehicle traffic and the limited use of military aircraft and its associated noise."

Lieutenant Colonel Mark Lastoria got visibly flustered after the lengthy Bastrop meeting erupted in applause when he was called a liar.

"It is not a preparation for martial law," he said with a sigh audible on a video of the meeting.

"Some people really, truly want to make this something it's not. All we want to do is make sure our guys are trained for combat overseas."

Efforts to create a realistic exercise by having some troops "conduct suspicious activity" while dressed as civilians -- and a map that labeled Texas and Utah as "hostile territory" -- played into the fears of people convinced the government is out to get them.

"This is by far the greatest public conditioning exercise in American history," Gary Franchi of the online Next News Network ominously warned his viewers.

"US military coordinating with local law enforcement and elements of the willing public will be conducting clandestine activities carrying weapons under aircraft cover at night wearing arm bands with a special insignia."

Martial law may not happen this summer, Franchi intoned. But when the times comes: "Troops will be ready and trained to take over your town."