Jade Helm 15 watchdog writes off liberals as 'useless': 'I can’t wait to kill thousands of these f*cks' 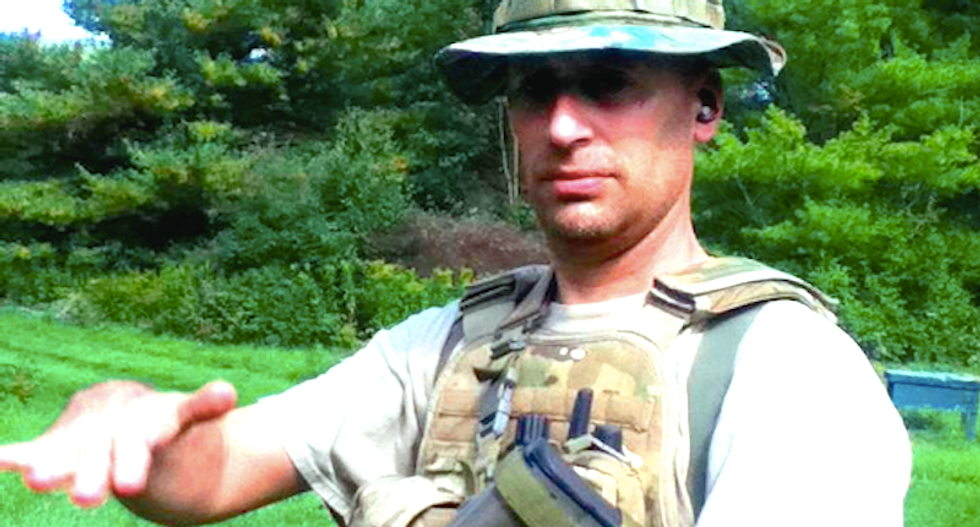 The leader of a volunteer group formed as a "watchdog" over Jade Helm 15 military exercises dismissed 90 percent of Americans as useless and said "he can't wait to kill thousands of these f*cks."

Pete Lanteri, who organized a New York chapter of the controversial Minutemen border militia, set up a Facebook page that attracted thousands of followers to monitor the eight-week training exercise in several southwest states.

The exercise, which started Wednesday, has sparked widespread fears of martial law, gun confiscation, and possible foreign invasion -- and the Texas governor asked the State Guard to oversee operations in that state after paranoid residents grilled an Army spokesman at a public meeting in Bastrop County.

Lanteri shut down the group's Facebook page last week, and set up private groups for individual states, after he complained it was "attacked by libs, conspiracy nuts and 90% of these useless f*cking Americans."

Another group member, who appended his name with the Roman numeral three marks an association with the 3 Percenters patriot group, agreed that "a second REVOLUTION IS NEEDED VERY BADLY."

“I can’t wait to kill thousands of these f*cks, man," said Lanteri, who now lives in Arizona.

He insisted to Alan Colmes, during an appearance on Fox News Radio, that his group members understand that Jade Helm 15 is simply a military exercise, as Pentagon officials have explained, but they still intend to help correct false reports in an age when "90 percent of the news is wrong."

"It's not the military that needs us, it's the everyday person who's messaging me, saying they're scared because they're seeing all this media attention (and asking) what's going on," Lanteri said.

Some residents have buried their guns to hide them from U.S. troops, and fearful concerns about military takeover dominates conversation in some small towns, reported the New York Times.

“They’re worried that they’re going to come in and take their firearms away,” said Sindy Miller, who runs a hair salon in Christoval, Texas. “Martial law, basically. I try not to listen to all these conspiracy-theory-type people. All they’re worried about is their beer and their guns.”

Lanteri said those fears had been stoked by conspiracy websites warning of international takeover and martial law, although he conceded that "anything was possible in this day and age" -- including Alex Jones' more fevered imaginings.

The watchdog leader said he accepts the military's explanation for Jade Helm 15 "at face value," but he does wonder whether there were other elements of the exercise that were being kept from the pubic, such as testing weapons that could knock out cell phone or Internet service.

"The government throughout history has tested on Americans without Americans knowing," Lanteri said.

Colmes agreed, citing the Tuskegee syphilis experiments conducted on unwitting black men in Alabama during the 1930s and 1940s, and Lanteri quickly bristled.

"I'm not specifically pointing out any specific race," Lanteri said.

He defended his post threatening violence against liberals and others who disagree with him, saying he is "a Sicilian hothead from the Bronx" and was upset because his dog had just died.

"I admit I wrote it, and I admit it was stupid, and guess what? I was hotheaded," Lanteri said.

Colmes asked Lanteri why the public should trust his reports about Jade Helm 15 if he was so quick to express his anger.