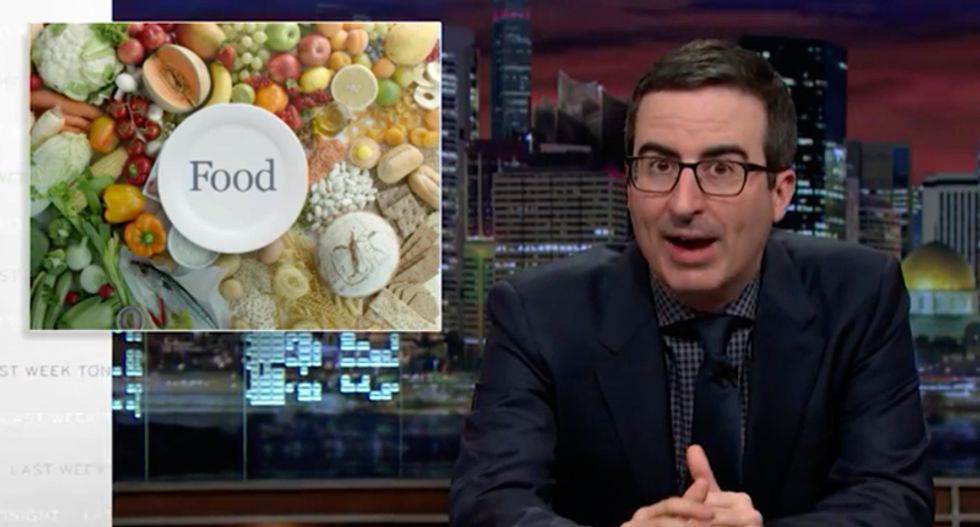 On this week's edition of HBO's Last Week Tonight, host John Oliver examined the findings of a recent report by the National Resources Defense Council that "Americans throw away about 165 billion worth of food ever year -- about 20 pounds per person every month."

Approximately 40% of food produced every year is wasted -- enough to fill 730 football stadiums.

“At a time when the landscape of California is shriveling up like a pumpkin in front of a house with a lazy dad, it seems especially unwise that farmers are pumping water into food that ends up being used as a garnish for landfills—because those landfills go on to cause problems of their own."

He then reminded his audience that nearly 50 million Americans live in "food insecure" households.

Oliver also used the occasion to take a shot at Donald Trump. “And if you’re thinking, ‘But hold on, John, what if I’m an asshole who couldn’t give a shit about America’s hungry families or the long-term viability of life on earth?’ Well, first let me say, ‘Mr. Trump! Thank you so much for taking the time to watch this show tonight. It’s lovely to have you with us,” Oliver said.

Watch the full segment below, uploaded to YouTube by HBO: