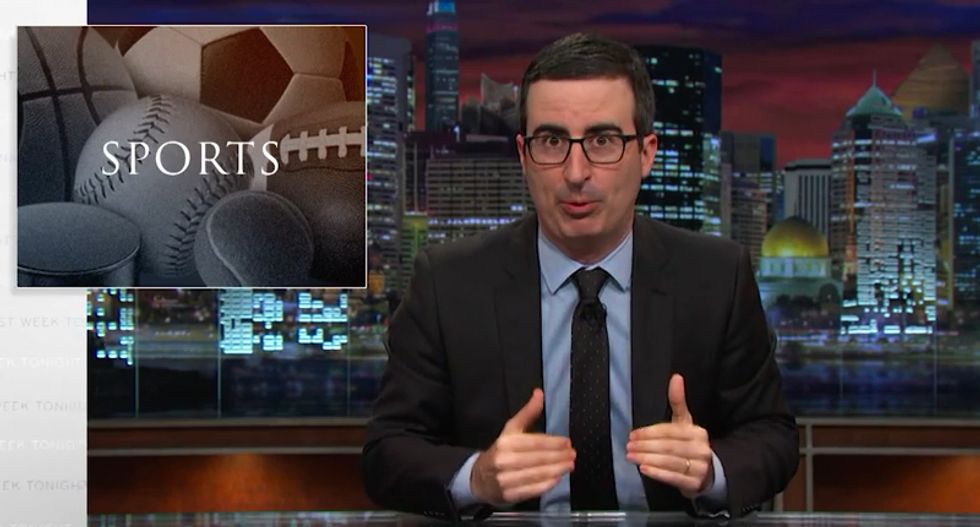 Noting that newer sport stadiums have become garish pleasure palaces -- showing clips  of stadiums with plush sky boxes featuring snakeskin-covered seats, swimming pools, and even a Florida stadium featuring a massive fish tank built behind home plate -- Oliver pointed out that the stadiums are increasingly being built for billionaires with taxpayer money, resulting in school cutbacks and curtailed social services.

“The vast majority of stadiums are made using public money,” said Oliver, pointing to a 2012 report showing “$12 billion has been spent on the 51 new facilities opened between 2000 and 2010.”

"And most of them look like they were designed by a coked-up Willy Wonka,” Oliver wryly pointed out.

In the case of Detroit, the cash-strapped city approved $280 million in taxpayer money for a new stadium for the NHL Red Wings, despite the fact that Red Wings owner Mike Ilitch, founder of the Little Caesar’s pizza chain, is worth an estimated $5.1 billion.

"That's a little hard to swallow," Oliver said. "I mean, sure, not as hard to swallow as Little Caesar's Crazy bread with an assortment of Caesar dips -- but still pretty hard"

Oliver also pointed to the number of NFL team owners (currently standing at three) threatening hometown fans and politicians with pulling up stakes and moving to Los Angeles if taxpayers don't shell out hundreds of millions dollars for a new stadium to house their privately held, and incredibly valuable, football teams.

Of particular note is the San Diego Chargers using a perfectly awful hip-hop video to rally fans to pressure local politicians in California's second largest city to save the team from LA -- at a cost to taxpayers of an estimated $900 million dollars.

The FBI searched the former president's home last week and removed around a dozen boxes of materials he had refused to turn over to the Department of Justice, and the "Morning Joe" host sorted through a litany of shifting justifications for Trump's possession of those documents.

If you think you've seen this movie before, it's because you have -- except the second time will be even more nerve-racking. Yes, world: get ready for Biden vs Trump 2.

In cowboy country, Cheney campaign dogged by specter of Trump

In Wyoming, Donald Trump still reigns supreme. For having dared to defy him, fellow Republican Liz Cheney, the prominent congresswoman from the conservative western US state, faces a perilous reelection campaign.

"Cheney's time is done," said Mike Schaefer, a 37-year-old resident of the capital Cheyenne, who is put off that "she's so against Trump."