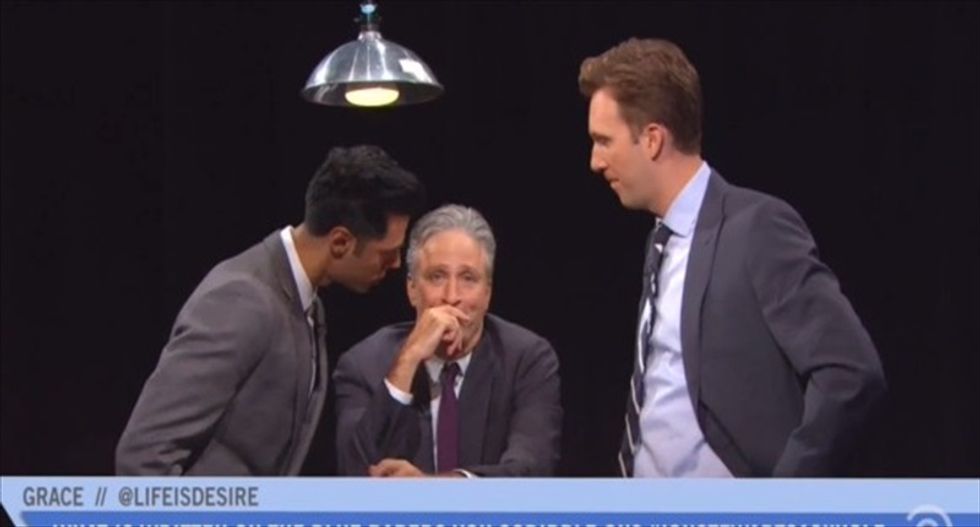 A day after releasing footage of himself taking questions from his studio audience, Daily Show host Jon Stewart fielded some more questions submitted online -- with correspondents Jordan Klepper and Hasan Minhaj there to "coax" him into answering truthfully.

"If I wanted jokes, I would've asked someone funnier," Minhaj snarked after Stewart tried to avoid a question on what he scribbles on his scripts during the show. In response, Klepper subjected the audience to clips from Stewart's film career, sending the host into a panic.

"Turn it off! Turn it off!" Stewart yelled over a clip of himself kissing Gillian Anderson in Playing By Heart. "I'm a terrible actor. I can't watch any more."

"Is that your attempt to look desperate and sad?" Klepper asked sarcastically, while Minhaj teased, "You are terrible."

"The blue papers are a script," Stewart finally admitted. "I'm just scribbling on them. I get bored. I can't smoke anymore, so I scribble, or I doodle the same cartoons over and over."

As they escalated their threats with bad Bruce Springsteen impersonations and an "Arby's enema," Klepper and Minhaj built up to a question Stewart really tried to duck: he had to choose who he would "F*ck, Marry, Kill" between ex-colleagues Stephen Colbert, John Oliver, and Larry Wilmore.

Unfortunately for the correspondents, Stewart not only acquiesced, but he went into too much detail for their comfort.

Watch Stewart take the tough questions, as posted online on Tuesday, below.

On Thursday, Rolling Stone reported that FBI investigators are now questioning former Trump administration officials to check on the former president's alibi that he issued a "standing order" to declassify the government material found at his Mar-a-Lago country club in Palm Beach, Florida — and that among those interrogated were top national security staff.

"Two people familiar with the matter tell Rolling Stone that the FBI has begun asking former Trump administration officials whether they’ve heard of the so-called 'standing order' Trump claims to have given," reported Adam Rawnsley and Asawin Suebsaeng. "In recent days, the sources say, the feds have sent interview requests to the ex-officials, including former National Security Council personnel. The FBI has asked some of them to visit local FBI field offices to answer follow-up questions concerning the ex-president, classified and highly sensitive documents, and the alleged 'order.' That order, Trump’s office insisted last week, dictated that any 'documents removed from the Oval Office and taken into the residence were deemed to be declassified.'"