Jon Stewart mocks Chris Christie: You're not even beating Trump in the GOP's 'egomaniac primary' 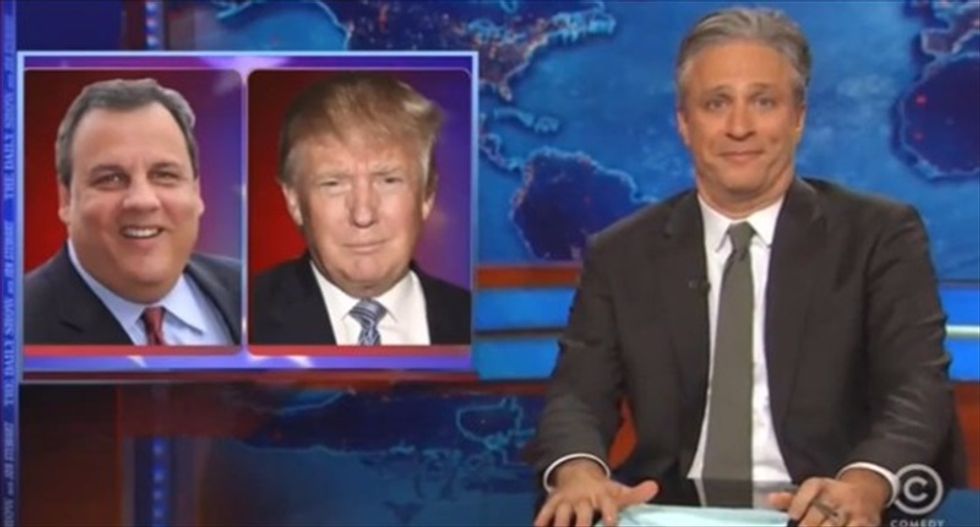 Jon Stewart ridiculed Chris Christie's presidential ambitions on Wednesday's Daily Show, saying that the New Jersey governor had not only done the unthinkable within his party, but lost his place as the GOP's resident self-proclaimed "truth-teller."

"How far must Christie have fallen to be a two-term governor unfavorably compared to a perfume-selling escalateur like Donald Trump?" Stewart asked.

Stewart also couldn't help but laugh when he recalled Christie telling Fox News that 65 percent of New Jerseyans really told pollsters that the governor would make a lousy president because they wanted him to stay.

"That is the saddest thing I have ever heard," he said, before offering Christie some straight talk of his own.

"It's not that New Jersians love you too much to let you go," Stewart explained. "It's that you've already second second in the Loud Northeastern Egomaniac primary."

But worst of all for Christie, the host added, Republicans would be willing to overlook his checkered record in office -- just not the fact that he welcomed President Barack Obama to New Jersey as the state recovered from Hurricane Sandy days before Obama's re-election in 2012.

"That is why Chris Christie will not win the Republican primary," Stewart said. "He [committed] the unpardonable crime of treating Barack Obama like a person. That is the insurmountable campaign hurdle: 'When Barack Obama arrived to lend aid to your hurricane-ravaged state, you shook his hand. Why did you not slay him in a Klingon honor duel? It's what Ronald Reagan would have done.'"