Jon Stewart: Sometimes you just have to say WTF and ride the Trump bl*wjob-a-coaster 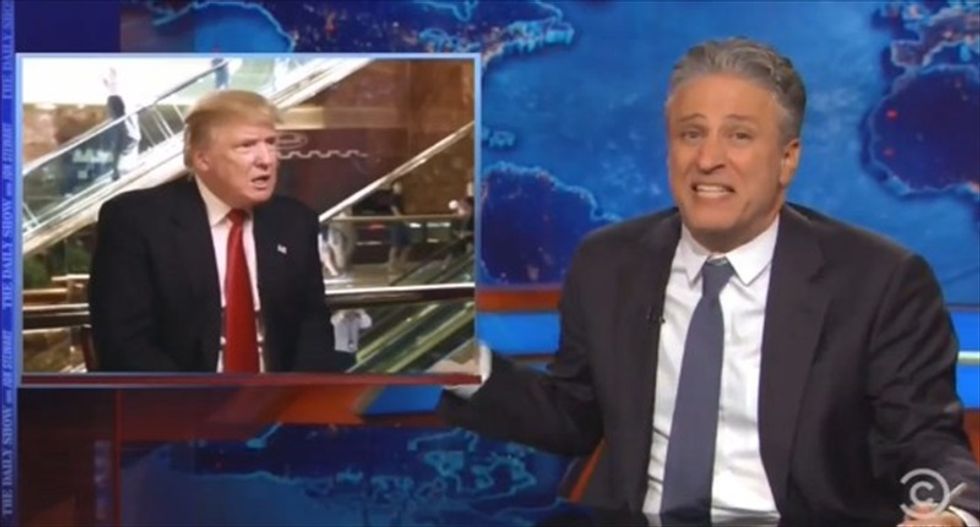 Daily Show host Jon Stewart admitted on Thursday that he had a problem: he could not stop watching Donald Trump, even if it meant ignoring other presidential candidates.

"We rail at the press for covering the flashy stupid stories instead of the important stuff," he said. "But damn. Damn! Sometimes you've just gotta say what the f*ck and ride the bl*wjob-a-coaster."

At the same time, he confessed that watching a barrage of Trump sound bites made him feel dirty.

"I'm not just letting myself down," he fretted. "I'm letting down the forefathers of this great nation, who trusted us to steward their noble experiment of a country. But they never came up against anything like this guy."

One possible reason Trump is trouncing other GOP contenders, the host argued, is that he has usurped roles -- the "dumb guy," the bully, the "guy who says crazy sh*t" -- many of the others usually fill.

"Donald Trump is the candidate version of the hot dog-crust pizza," he said. "You don't want it, you never ordered it. You can't believe someone came up with it. But now it's all you want to eat."

Stewart did take a moment, though, to chide Sen. Lindsey Graham for reacting to Trump giving out his private cell phone number by releasing a video showing the senator trashing several phones.

"You know you just had to change your number," Stewart said. "What you did seems like you thought your TMobile was cursed by a gypsy."

But Graham got off easy compared to John Kasich; Stewart admitted he could not even watch footage from the Ohio governor's campaign launch.

"Holy sh*t," he exclaimed. "That is the base model generic white guy. I don't know where his hands end, and the lawnmower begins."