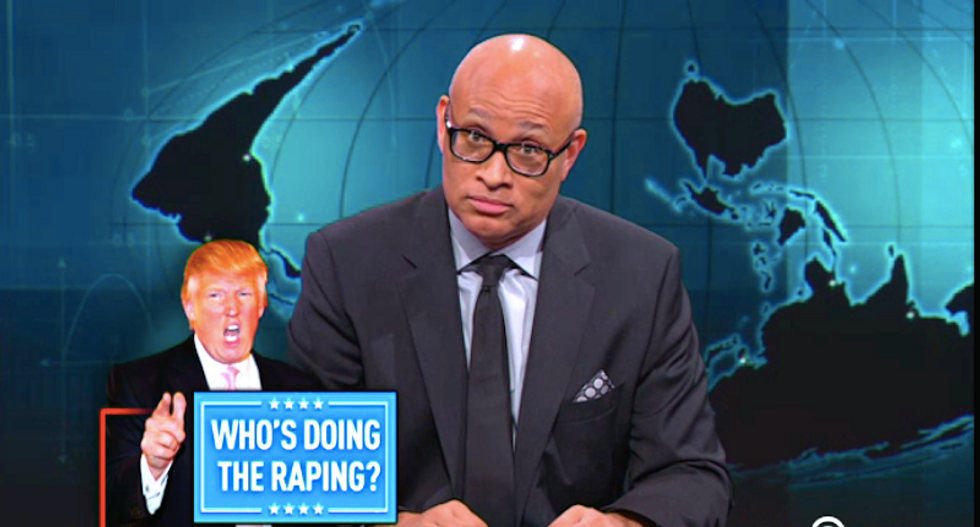 The real estate tycoon and reality TV star has been dumped by a number of business partners over offensive comments he made about Latino immigrants during his presidential campaign announcement – and he has sued or threatened to sue many of those former associates.

“I am really looking forward to the Trump presidency,” Wilmore said, adopting an impression of the candidate. “‘To combat global warming, I’ll be suing icebergs and polar bears. I’m also suing that hurricane that’s approaching Florida – back off.’”

Wilmore mocked Trump for claiming that he had decided to terminate his relationship with Macy’s after the retailer announced it had dropped his clothing line.

“Are you trying to gaslight us?” Wilmore said. “Do you know how reporting works? We all know you were dumped. He’s like a 5-year-old: ‘Hey, Macy’s – I’m rubber and you’re glue. Or better yet, I’m the most classiest, most luxurious, most vulcanized rubber ever made, and you’re the most disgusting, most liquidy, least adhesive glue ever.’”

He ridiculed the candidate’s response to rocker Neil Young, who asked Trump to stop playing his song “Rockin’ In The Free World” during campaign events, and the candidate told Fox News that he doesn’t “even like the song that much.”

“You picked it as the walk-up music for your presidential announcement,” Wilmore said. “It’s not Pandora.”

Wilmore suggested that Trump adopt as his campaign slogan the bizarre defense he offered for his outrageous claim that Mexican immigrants were drug dealers and rapists.

Despite all the controversy, muffed follow-ups, and ludicrous bluster, Trump is running a close second to former Florida governor Jeb Bush among likely Republican voters – and the candidate pointed out that voters trust him the most on terrorism and international trade.

“Hold on a second – is he analyzing his own poll results and then referring to himself in the third person?” Wilmore wondered. “Are you a presidential candidate or a prima donna wide receiver?”