Larry Wilmore mocks Confederate flag-waving KKK member: 'I guess your dentist died under that flag, too' 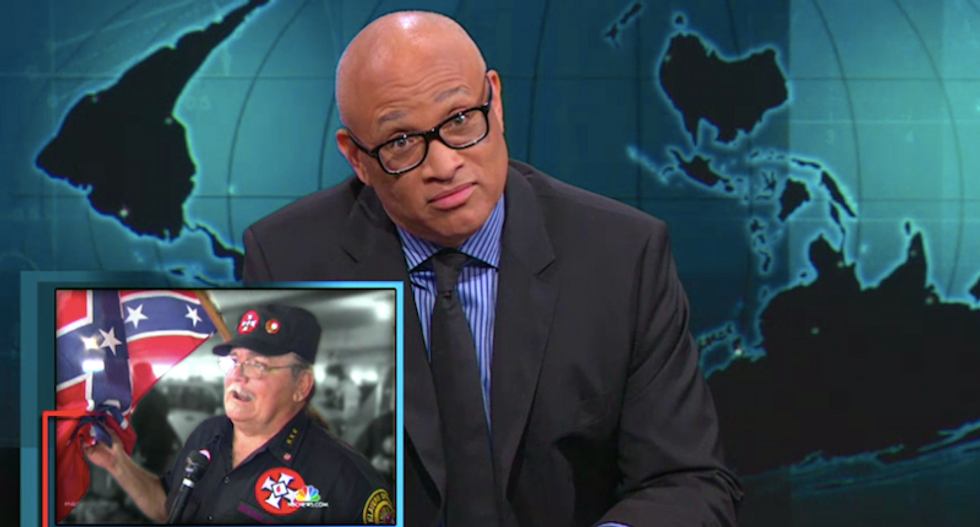 Larry Wilmore mocked Ku Klux Klan supporters who rallied around the Confederate flag over the weekend in South Carolina.

The "Nightly Show" host, after discussing the hacking of adultery website Ashley Madison, marveled at the scheduling Saturday afternoon of the KKK rally on the statehouse grounds at the same time as a nearby event by a group affiliated with the New Black Panthers.

"The Black Panthers and the Klan got booked for the same spot on the same day?" Wilmore said. "Seriously? This is the worst booking error since Cosby was tapped to give the keynote address at the spring narcolepsy convention."

He played portions of an interview with one KKK supporter, who was missing most of his front teeth, who said he was rallying to defend the Confederate flag -- which he said his forefathers had died under.

"I guess your dentist died under that flag, too," Wilmore said.

He said he doubted the KKK supporters' intentions, but he asked them to explain their defense of the Confederate flag in hopes of understanding their point of view.

Wilmore showed video of that same toothless Klan member taunting black bystanders that they were "the color of a bowel movement," as other white supremacists hurl racial slurs and threaten violence against black people.

"There you have it, some of the loudest proponents of the Confederate flag," Wilmore said. "For weeks now, I have been trying to make clear the hate associated with that flag, but there's nothing clearer than a man holding the Confederate flag high while making ape noises at a crowd of black people. What else is there to say?"