Larry Wilmore on Dubose killing: ‘In the cop’s defense — he thought he could get away with it’ 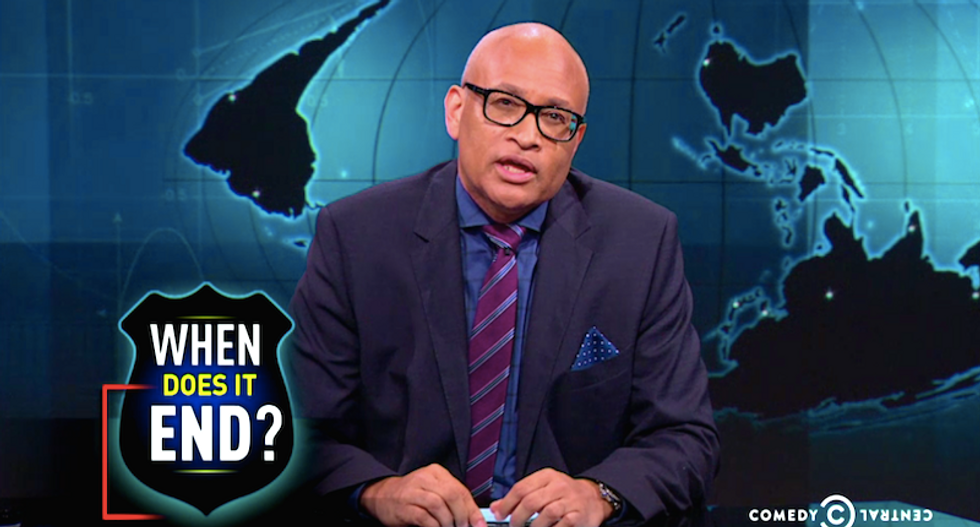 Larry Wilmore assured his audience he would rather just talk about his favorite episodes of "Battlestar Galactica," but instead he addressed the police shooting of yet another unarmed black person.

"A Cincinnati cop has been indicted for the killing of an unarmed black man, but in the cop's defense -- he thought he could get away with it," Wilmore said.

Ray Tensing, who had been a University of Cincinnati police officer, was indicted this week for murder in the July 19 killing of 43-year-old Sam Dubose.

Wilmore said there have been so many similar cases lately that his writing staff basically has to plug names and other details into a Mad Libs-style script, and he showed an image of "Larry Libs."

"I'm furious about the video of (name of the victim) the unarmed black (gender) being murdered by a white cop with the (city) police department. It makes me want to (verb) all over everything with a big (vegetable)," the graphic read.

"They barely have to show up for work," Wilmore said of his writers.

The officer said Dubose tried to run him over, and two other officers corroborated his account, but video showed they all three lied.

What set this case apart, Wilmore said, was the strong language used by Prosecutor Joe Deters -- who described Tensing as a "murderer."

Wilmore applauded Deters and thanked him for doing his job, but he pointed out that the prosecutor just last month used troubling language to describe the black suspects in a videotaped beating of a white man.

"They will hurt you, they will hurt your grandma,” Deters said. “The root cause of this is there’s no discipline in the homes, they don’t go to school, you know, they live off the government, no personal accountability, and they just beat people up for no reason, and it’s disgusting.”

Wilmore said comments like that create an atmosphere where police feel justified to use violence against black people.

"When this is how you talk about an entire community that you're supposed to be working with, when you paint them as 'they,' and you talk about them like they're less than human, is it any wonder that it's led to incidents like this in that very community?" he said. "I mean, seriously -- did we learn nothing from 'Battlestar Galactica?'"