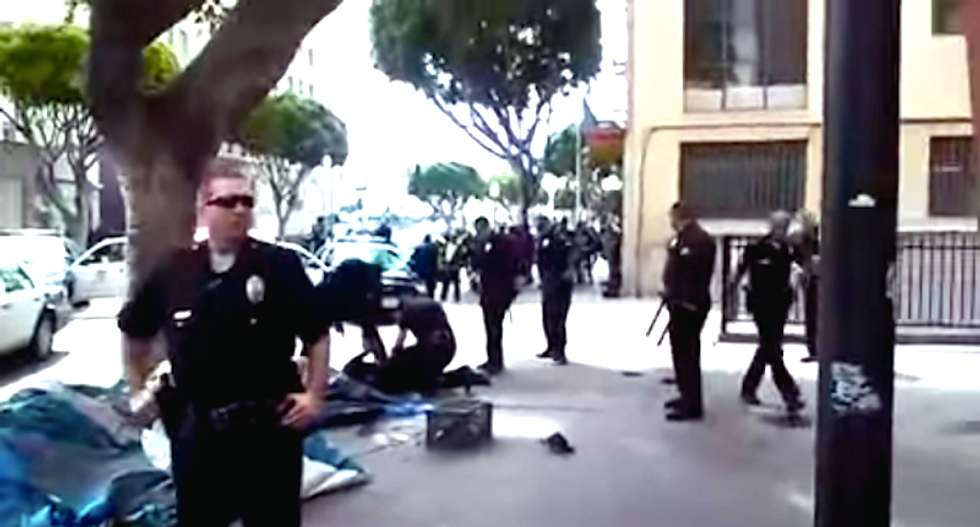 A homeless Los Angeles woman who picked up a police baton during a chaotic scuffle between officers and another transient faces a possible prison sentence of 25 years to life on charges of assault and resisting arrest if convicted at trial, a spokesman for prosecutors said on Thursday.

An attorney for Trishawn Carey, 34, whose prosecution has been criticized as excessive by local activists, said on Thursday he expects his mentally ill client to be released on $50,000 bail by Friday.

A Los Angeles judge on Wednesday reduced Carey's bail to that amount from more than $1 million after finding the higher figure was excessive, said her lawyer Milton Grimes.

Carey was captured on surveillance video picking up a police baton from the ground during a scuffle in March between Los Angeles police and homeless man Charly Keunang that resulted in the Cameroonian's shooting death.

The police shooting gained widespread attention, even as Carey's arrest was largely overlooked.

In the video, Carey briefly holds up the baton and faces officers before two of them push her to the ground.

Prosecutors are seeking a sentence of 25 years to life for Carey if she is convicted on charges of assault on an officer and resisting arrest. Her prosecution has raised questions about California's three-strikes law, a 1994 measure that provides for lengthy sentences on a conviction for a violent or serious crime after two prior convictions.

"Somebody like Trishawn could be disappeared into the system so quickly if people aren't looking out for her," said Cynthia Ruffin, an activist working on the case for the organization Los Angeles Community Action Network.

Carey has previous convictions for robbery in 2002 and assault with a deadly weapon in 2006, Los Angeles District Attorney's Office spokesman Greg Risling said.

Risling confirmed Carey faces a possible sentence of 25 years to life under the three-strikes law, but declined to respond to criticism from activists about the charges.

Deputy district attorney Gregory Denton, who is prosecuting the case, told the Los Angeles Times this week he will not seek to prove Carey swung the baton or struck anyone.

"An attempt to strike someone is assault," Denton told the newspaper. "There's no mystery here."

Grimes said his client suffered from schizophrenia, bipolar disorder and depression and her prior convictions stemmed from her mental illness.

If Carey is released on bail, a judge has ordered her to enter a program that houses and supports formerly incarcerated women, Grimes said.

Watch video from the incident posted online by Victims of Police: