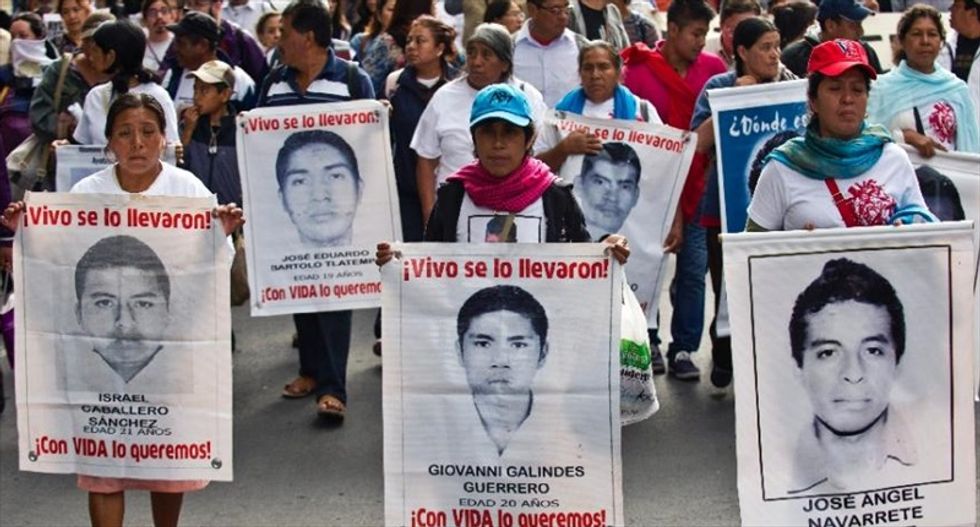 Relatives and friends of the 43 missing students from Ayotzinapa hold their portraits in Mexico City on March 26, 2015. Photo by Ronaldo Schemidt for Agence France-Presse.

The National Human Rights Commission said in a preliminary report that it found "flaws in the inquiries, lack of attention and assistance to victims, and omissions in the diligence" of prosecutors.

The commission urged investigators to question again police officers and soldiers deployed in the area on the night of the September 26-27 disappearance in the southern Guerrero state town of Iguala.

Authorities should also trace the use of two cellphones belonging to the students after local police attacked the group of young men in a night of violence that left six people dead and 43 missing.

"Due diligence is needed to have an investigation of the scale of the event," commission president Luis Gonzalez told a news conference.

The attorney general's office concluded that crooked local police confronted the students on the orders of the mayor after the young men arrived in buses that they had commandeered.

The officers abducted 43 of the students and handed them over to the Guerreros Unidos drug gang, which killed them and incinerated their bodies, according to prosecutors.

Dozens of officers and gang suspects have been detained, along with the mayor.

Only one of the students has been identified among charred remains found in a landfill. Parents of the missing have rejected the government's conclusions.