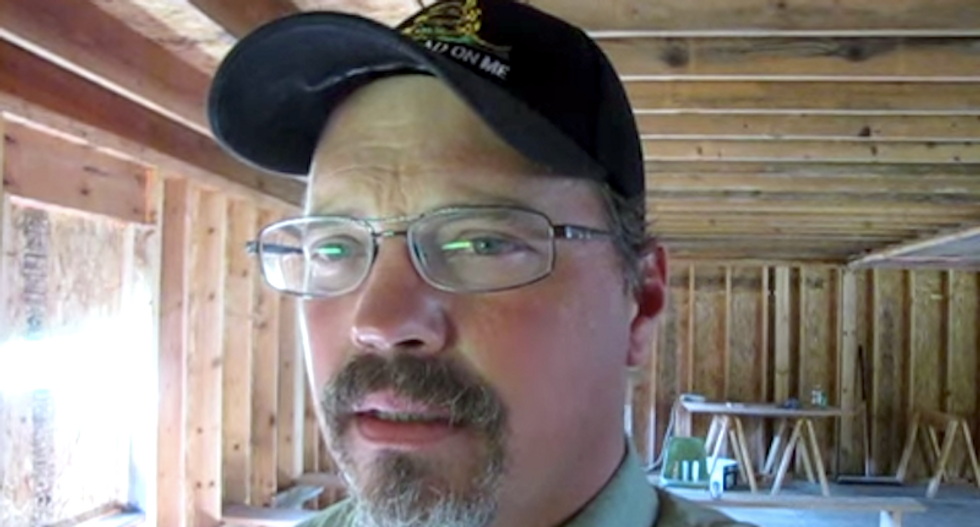 A Michigan man is vowing an armed resistance to his removal from a home that he believes is rightfully his – but the militia groups he has tried to rally to his side have cautioned members not to get involved.

“I will not be evicted from my property, and, when I say that, what I mean is I will use all appropriate force to defend my property,” Visner said in a video that has been widely shared among right-wing patriot groups and on social media.

“This is the start, folks,” continued Visner, wearing a "don't tread on me" cap. “I would imagine that they’ll show up with a SWAT team, bunch of armed men and it’ll go down like the Bundy Ranch – only with no opposition, and I will be executed by the same sheriff’s department that stole a different house in 2010.”

The title of the video, which has been shared in multiple discussion forums on the Reddit social networking site, promises "the first shots of the revolution" were about to be fired on Visner's behalf.

The U.S. Navy veteran and his wife fell victim to an apparent real estate scam by an employee of the Isabella County Sheriff’s Department, reported The Morning Sun.

Visner said he bought his former home on a land contract from Shelly Sweet, the sheriff’s department employee, only to learn seven months later that the seller had not been making payments on the house – and a bank foreclosed without his knowledge.

He claims that Sweet changed the locks and gave away $55,000 worth of his personal property to friends and co-workers on a weekend in 2010 that she knew the Visners would be out of town, claiming the family had abandoned the home.

Sweet told her employer that the Visners had not been making payments on their home, although he claims he has canceled checks to prove her wrong.

Visner said he was arrested for misusing 911 services after calling deputies three times in the days after the family was locked out of their home and had their belongings given away.

He claims the sheriff’s department and prosecutor’s office have delayed and mismanaged their investigation into his claims – which he said is basically a conspiracy to deprive his family of their constitutional rights.

A county judge two years ago dismissed a $3.9 million lawsuit filed by Visner against Sweet and Sheriff Leo Mioduszewski.

The Navy veteran claims the deputy who arrested him on the misdemeanor 911 charge essentially kidnapped him – which he said is a federal felony punishable by death.

Visner has recorded a series of YouTube videos to attract militia groups to his cause, but so far none have rallied to support him – saying the man had been unable to prove his most outrageous claims.

“We have all instructed our groups to stand down,” said the Michigan III% group on its Facebook page. “This is not a situation where Mr. Visner's rights are being violated. Under Michigan law he has been receiving his due process. We cannot with the best intentions of our people ask them to go to the front lines and risk their lives for someone who refuses to provide us with the necessary documentation for us to know this is a just cause.”

The militia group’s post was co-signed by 20 other patriot groups from Michigan, New York, and elsewhere, and the post invites other groups to urge their members not to join Visner or contribute to the GoFundMe page he set up to solicit donations.

Watch this video about the case posted online by Ted Visner: