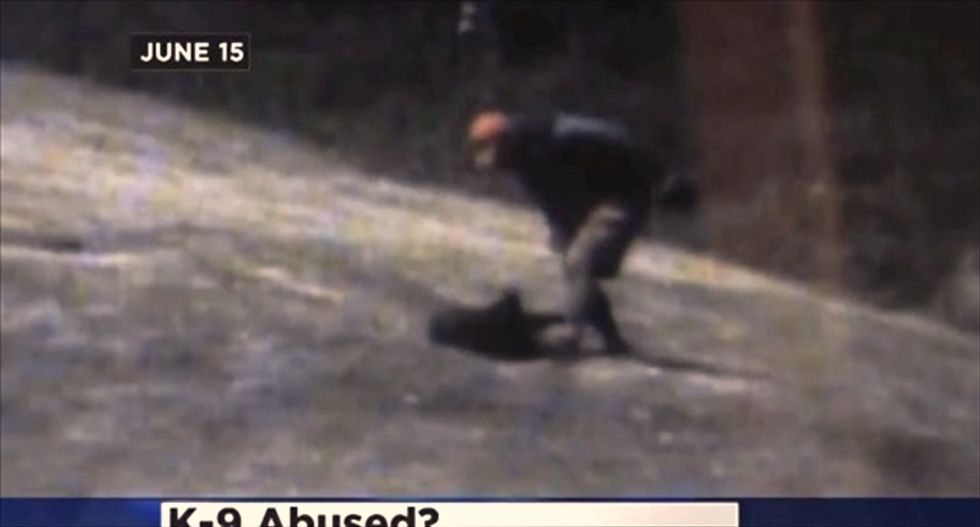 A sheriff's deputy in Ramsay County, Minnesota was charged with animal cruelty and assault against a public safety dog after being caught slamming his K-9 partner to the ground, then striking the animal inside a casino, WCCO-TV reported.

Officials in Carlton County arrested 48-year-old Brett Arthur Berry on June 15, after security cameras at the Black Bear Casino captured the attacks earlier this month. Berry was attending a certification course in the area at the time of the incident.

"It's something that is certainly unusual," Carlton County Attorney Thomas Pertler told the Duluth News Tribune. "I haven't heard of another case like it."

The criminal complaint against Berry stated that casino security began tracking him after staff kicked him out of a lounge for making "some unwanted advances." He also "repeatedly made obscene gestures towards security personnel" after security ordered him out of the area.

The footage shows Berry picking the dog up by its neck, then throwing it to the ground.

"The dog then appeared to be afraid of the defendant despite the relationship between the dog and the defendant as a K-9 team and would not come back to the defendant when called," the complaint stated.

The dog can also be seen entering the casino and getting stuck in a vestibule. After catching up to the animal, authorities said, Berry began "beating it repeatedly on or about the shoulder or ribs area."

Carlton County officials were called to the casino around 3 a.m. that evening. The complaint stated that Berry "appeared to be under the influence" on the night in question.

A veterinarian later determined that the dog showed "no obvious signs of injury were apparent that would rise to the level of substantial or great bodily harm." Berry is due back in court on July 23. If convicted, he faces 90 days in jail and/or a $1,000 fine for each charge.