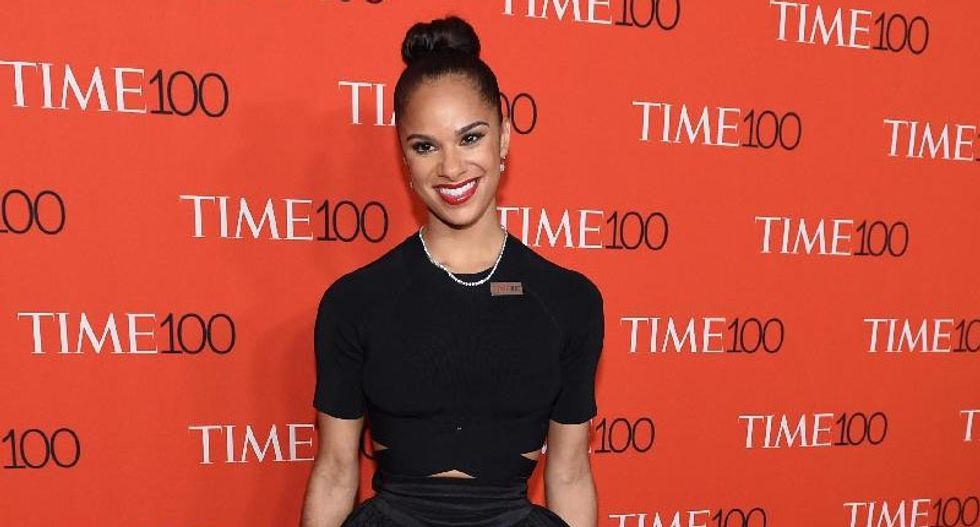 Misty Copeland attends a gala celebrating the Time 100 issue of the Most Influential People at the Lincoln Center in New York on April 21, 2015 (AFP Photo/Timothy A. Clary)

Misty Copeland, whose personal story and social media prowess helped make her a rare celebrity in ballet, made history Tuesday as the first black female principal dancer at the American Ballet Theatre.

The New York-based company, one of the most prestigious ballet companies which has welcomed top international talent over its 78-year history, announced it was promoting both Copeland and another American, Stella Abrera, to the rank of principal dancer.

Copeland, 32, has drawn an unusually wide fan base for a ballerina.

She has more than 500,000 followers on Instagram and an advertisement she recorded for a sportswear company, with featured her delivering a motivational message, has been seen more than eight million times on YouTube.

Copeland has been open about her goal of advancing in the ranks of ballet, an art form traditionally dominated by Europeans.

"It's important for me to set an example of what a healthy image is, what a ballerina can be," she said in a video released in April by Time magazine, which put her on the cover as it named her one of the 100 most influential people.

"She doesn't have to be a white woman that's real thin, that she can look like the world.

"And I think that's what American Ballet Theatre also helps to represent, is what Americans look like and that dreams are possible here, and that you really can push yourself to become anything with the right work ethic and support around you," she said.

Unlike many ballerinas who begin rigorous training when they are barely walking, Copeland did not grow up with ballet and only began taking up dance seriously when she was 13.

She has described her initial inspiration for dancing to be similar to experiences of many young girls -- dancing along to songs by pop stars Mariah Carey and George Michael.

Copeland has also spoken of difficulties in her childhood -- growing up uncertain of her future as she lived with a series of sometimes difficult stepfathers around the Los Angeles area.

After she showed an early prowess for dance, Copeland moved into the home of a mentor to concentrate on her training.

Her mother eventually sought for her to return home full-time, leading to a complicated custody battle that made national headlines in 1998.

She quickly gained professional recognition after joining the American Ballet Theatre, where she was named a soloist in 2007 when she was just 24.

Last year, she played one of ballet's most celebrated and demanding roles -- the dual Odette/Odile lead in Tchaikovsky's "Swan Lake."

She has also won acclaim for playing the title role in Stravinsky's "The Firebird" and the lead part of Swanilda in "Coppelia."

While Copeland makes history as the first female principal dancer, the American Ballet Theatre two decades ago named an African American man to the rank -- Desmond Richardson, who now is co-artistic director of the Complexions Contemporary Ballet which he helped found.

Arthur Mitchell broke the color barrier in 1956 by becoming principal dancer at another top company, the New York City Ballet.

Copeland's appointment comes amid growing public debate in the United States about the persistence of racism.

A white supremacist on June 17 shot dead nine people at a historic African American church in South Carolina, leading to a push to remove Confederate symbols in the South.