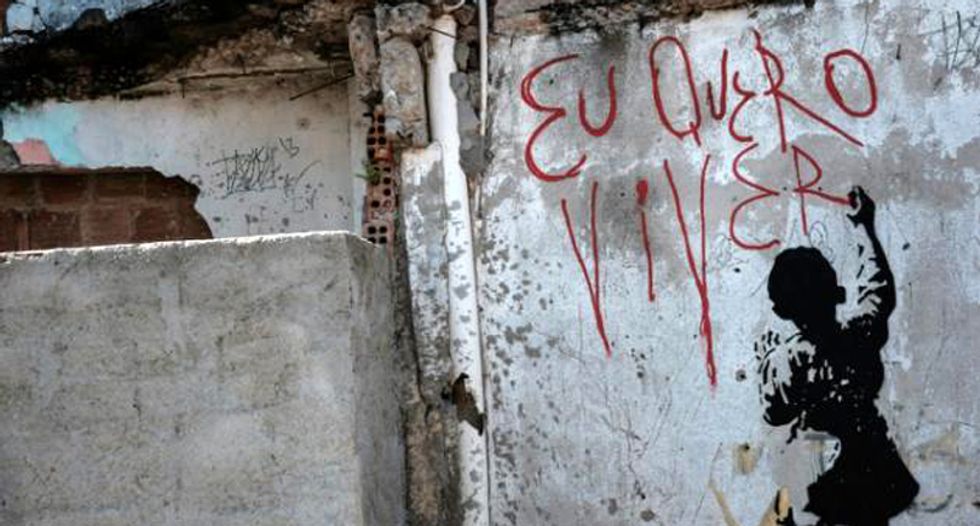 A graffiti reading "I want to live" is seen at a shantytown of the Alemao complex in Rio de Janeiro, Brazil on April 8, 2015 (AFP)

Twenty-eight Brazilian children and adolescents are murdered every day, double the number a quarter century ago, when Latin America's biggest country passed a law to protect minors, UNICEF said Monday.

The United Nations children's rights agency contrasted Brazil's dismal toll -- 10,500 murders of minors in 2013 -- with Congress's focus on a law lowering the age of adult criminal responsibility from 18 to 16.

The death rate for minors, UNICEF said, is higher than typical even for warzones.

"You can see a push from parts of society to make adolescents responsible for the violence," the report said.

"In reality, there are death sentences every day on adolescents, especially those who are black, across the whole country."

The youth mortality comes against a background of widespread violence in most Brazilian cities, with just the city of Rio de Janeiro, for example, already seeing 534 murders and more than 1,000 attempted murders in the first five months of this year.

Unicef called the deaths of youngsters "disturbing," putting Brazil in second place behind Nigeria for murders of under 20-year-olds.

Black youths, usually poor and living in the outskirts of cities, are almost four times more likely to be murdered, said the study, issued to mark the 25th anniversary of Brazil's landmark law on children's rights. Most of the crimes go unsolved.

However, UNICEF underlined that it's not all bad news.

In the last quarter century, 60 percent of Brazilians have seen their income rise and 39 million people in a country of 202 million have escaped extreme poverty, with the national economy rising from 13th to seventh largest in the world.

The country has also advanced significantly in many areas, from education and nutrition to infant mortality, even if babies born to indigenous communities are twice as likely to die before reaching the age of one.