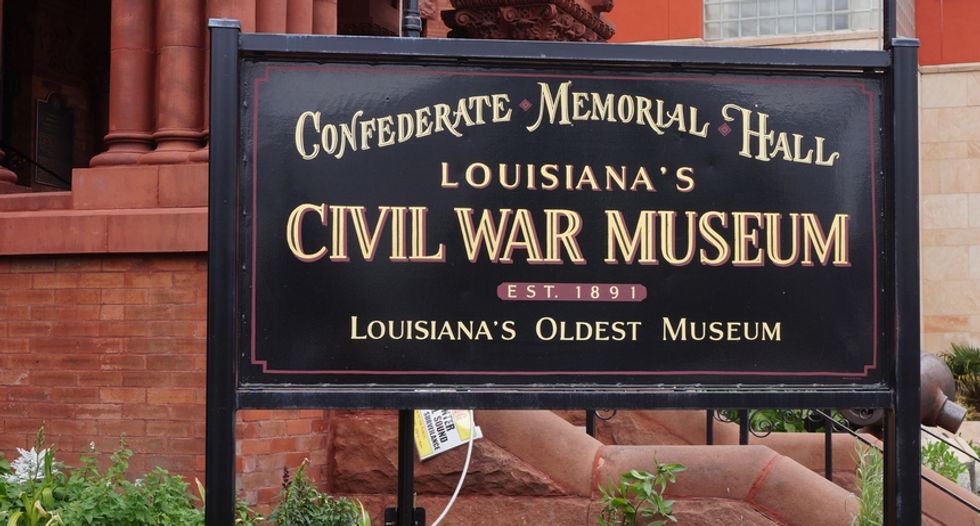 Mitch Landrieu aims to rid city of statues of Jefferson Davis, Robert E Lee, and other Confederate figures while he calls for the renaming of a major parkway

As southern statehouses and cities debate the legitimacy of flying the Confederate flag , the mayor of New Orleans is proposing the most comprehensive plan yet to achieve lasting racial reconciliation in the wake of last month’s mass mass shooting in a South Carolina black church. Mitch Landrieu wants to dismantle historic city statuary that honors key figures of the Civil War, and rename a major parkway whose namesake led the Confederacy.

Landrieu, the first white mayor of New Orleans since his father, Moon Landrieu, left office in 1978, says the statuary does not represent a city rebounding from the devastation of Hurricane Katrina into one he insists is more inclusive of all races and identities.

In a statement, he said New Orleans was “a place a where we celebrate life, liberty and the pursuit of happiness, not death, war and slavery” and that the statutes were “symbols of supremacy from places of reverence that no longer, if ever, reflect who we are”.

All of the statues are prominent, and some have stood for more than a century. The 16ft Lee statute was erected in 1884 and sits atop a tall marble column in the middle of Lee Circle, a busy turnaround in the museum district.

Proponents of the plan say now is the time for Landrieu to act, in step with political pressure to eradicate public symbols associated with Confederate history that contemporary hate groups have adopted.

In the weeks following the Charleston killings, protesters in New Orleans targeted the statues. Dozens of activists burned a Confederate flag at Lee Circle and the Beauregard statue was vandalized: “Black Lives Matter” appeared on its side.

Susan Glisson, executive director of the Winter Institute of Racial Reconciliation at the University of Mississippi , which Landrieu tasked to conduct public forums on the statuary, said: “Symbols that are conflicting to some or perceived to be outright hateful are damaging to the public good.

“It can create an environment that doesn’t feel welcoming to everyone. Especially in public spaces where we need to thoughtful to represent who we are as a people.”

However, Ben Jones, a spokesperson for the Sons of Confederate Veterans, said Landrieu’s proposal was “a massive insult”.

“Does it do anything about racism?” Jones asked. “No. This is a phony Band-Aid. All it has done is make people angry. It assumes we’re not sensitive to the plight of slavery and those who descended from slavery. We have a right to our feelings and to pay our respects to our ancestors.”

Jones is a former Congressman from Georgia who acted in the hit 1980s television series The Dukes of Hazzard, which has been condemned for its use of the Confederate flag. He considers such criticism a form of “cultural cleansing of southern culture” and a distraction from greater recognition that the whole country’s wealth was created through slavery.

“When you start renaming things, you may avoid certain conversations, but when does it end?” he asked.

Terrence Fitzmorris, a historian at Tulane University in New Orleans, said the debate in New Orleans represents “a flawed understanding of southern history” from both sides.

“There are multiple souths,” said Fitzmorris, adding that critics often neglect the fact there were abolitionists in the south or that figures like Lee, who sought to bring both sides together after the war, were multifaceted people.

“Both sides have a single version of southern history and that is what driving the shrillness” of the current debate, he said.

Fitzmorris did not disagree that the statues were hurtful to black southerners and should be dealt with, but he also worried about eradicating historical artefacts.

“Whether they stay or go, that’s a political decision,” he said of the statues. “But removing them will tamper our ability to reconcile ourselves with our past. I think they need to be understood; they need to be talked about and discussed and dissected.”

Glisson said her forums would foster such conversations but admitted that Landrieu was committed to removing the statuary nonetheless. The city council will make its final vote in September.