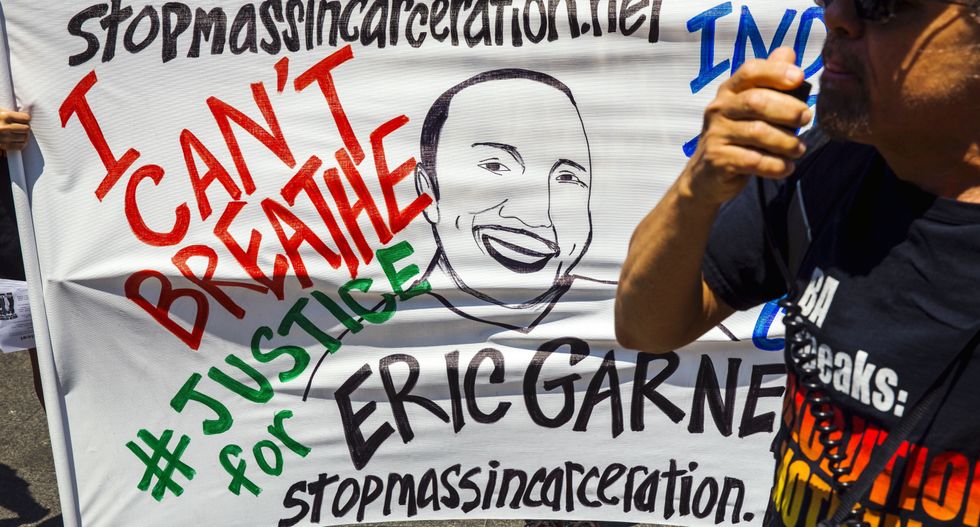 Protesters rally and speak out on the one year anniversary of the death of Eric Garner in New York, July 17, 2015. REUTERS/Lucas Jackson

A state judge has ordered New York City to release a summary of misconduct findings against the police officer who put Eric Garner in a fatal chokehold in a case that added to the national debate on how police deal with minorities.

After police sought to question Garner, an unarmed black man, about selling loose cigarettes illegally, Officer Daniel Pantaleo placed him in a chokehold maneuver that is banned by the New York City Police Department. The incident was captured on video and sparked widespread protests.

Garner's death was ruled a homicide by the city's medical examiner, with asthma and obesity as contributing factors. His gasped last words, "I can't breathe," became a rallying cry for protesters.

The Legal Aid Society had asked for the number of complaints against Pantaleo that had been substantiated by the Civilian Complaint Review Board, an independent watchdog agency, and for any disciplinary recommendations the board made as a result. The request did not include the substance of the complaints themselves.

After the board refused, citing state law that protects personnel records from disclosure to avoid backlash against individual officers, the Legal Aid Society sued the city.

"The summary, as requested, will provide only the most rudimentary of information," Schlesinger wrote. "Most importantly, the summary will not provide any detail as to what the complaints pertain to, and/or what the underlying events which triggered such complaints were."

A spokesman for the city’s law department said the decision was under review.

“The ongoing debate about the effectiveness of our current systems of police accountability is happening largely in the dark due to the CCRB's strict policies against disclosing individual officer misconduct,” Tina Luongo, the attorney-in-charge of criminal practice for the Legal Aid Society, said in a statement. “Clearly, this needed to change.”

Earlier this month, the city agreed to pay Garner’s family $5.9 million to settle a planned lawsuit over his death.

The family has called for federal charges against Pantaleo. The U.S. Justice Department announced an investigation into Garner’s death after the New York grand jury decided not to file an indictment against Pantaleo.