'Nothing short of heroic': Oregon teen punches window out to save 78-year-old woman from burning car 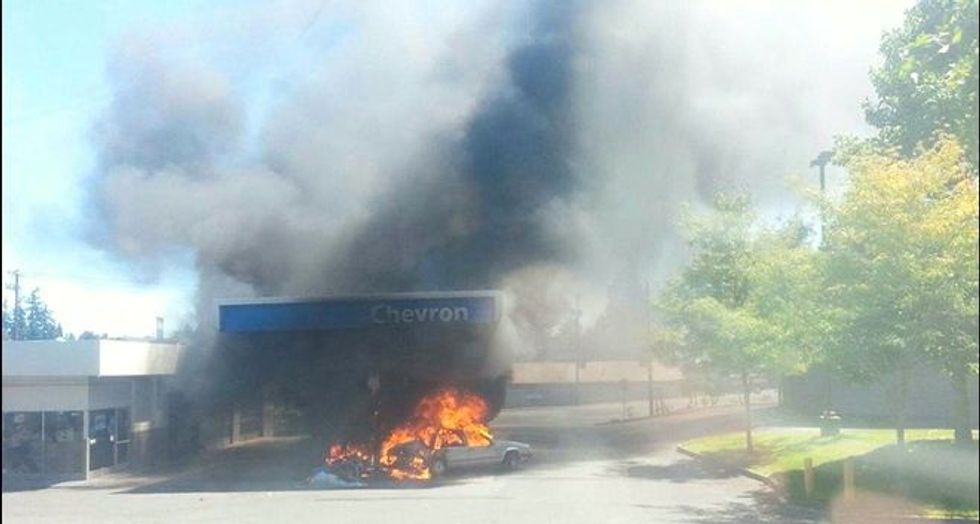 A car erupts into flames after crashing into gas pumps at a Chevron on Beaverton Hillsdale Highway, Saturday, July 18, 2015. (Photo: Stephanie Gaston)

An Oregon teen who punched out the window of a burning car at a gas station to save an elderly woman over the weekend was "nothing short of heroic," fire officials said on Monday.

Phillipe Bittar, 19, pulled Sally Moeller, 78, to safety after he and his brother noticed a car engulfed in flames at a gas station in the Portland suburb of Beaverton on Saturday afternoon.

Tualatin Valley Fire and Rescue Battalion Fire Chief Leonard Damian credited Bittar's quick action - as well as a gas station employee who shut off the main switch to the gas pumps after the fire started - for preventing a tragedy.

"Had this individual not broken out the window and pulled the patient out of the burning car and to safety, I don't believe she would have survived," Damian said in a statement.

"His actions were nothing short of heroic," Damian added.

Fire officials said the fire was sparked after Moeller's car collided with the gas pumps. She was treated at a nearby hospital for non-life threatening smoke inhalation.

The Washington County Sheriff's Office said the incident did not appear criminal, saying Moeller seemed to have mistakenly accelerated in reverse instead of applying the brakes.

After Bittar breaking the window with his hands and pulling Moeller to safety, he went back and noticed the flames had reached the seat where she was sitting, fire department spokeswoman Alisa Cour said.

Bittar could not immediately be reached for comment, but told the Oregonian newspaper he just acted on instinct and realized later the gravity of what he had done.

"I didn't really have much time to think and process everything as it was happening," he told the paper. "But seeing the fire and the car and knowing she was out, it really hit me that I saved her life, and it felt really good."

Watch a story on the rescue, as posted online, below.