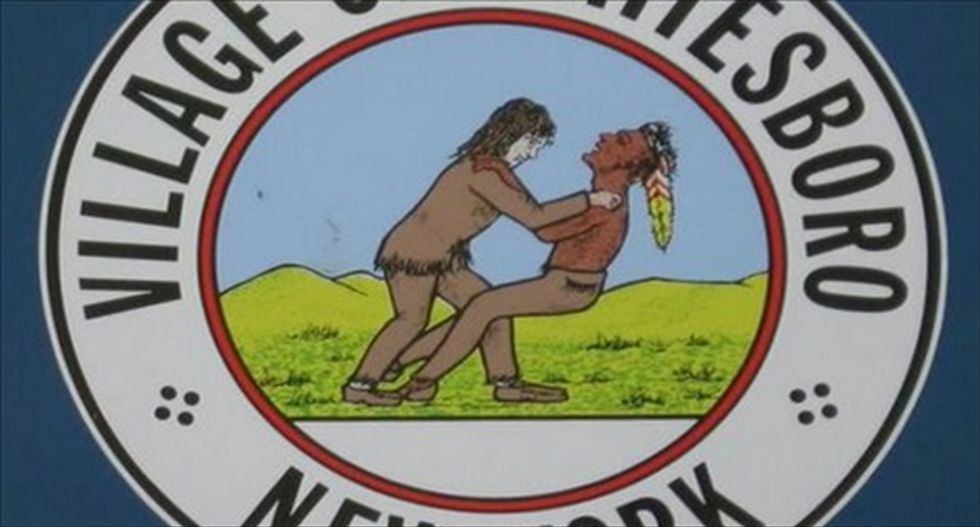 Seal for the village of Whitesboro, New York, as seen online.

The mayor of a village in New York State is defending his community's seal amid increased scrutiny spurred on by the debate surrounding the Confederate battle flag, and insisting that the seal -- depicting a white man seemingly strangling a Native American man -- is not racist.

"If they looked at the seal and went with an opinion based solely on what they're looking at, I could understand why people would have concern about it," Whitesboro Mayor Patrick O'Connor told the Village Voice. "I think you have to take all the facts into consideration. And if people take the time to do that and they reach out to us, or they do the research themselves, it's actually a very accurate depiction of friendly wrestling matches that took place back in those days."

As al Jazeera reported, the seal -- which is displayed on a sign outside the village -- began attracting attention online last month:

Around the same time, WIBX-AM reported that the online greeting card company someecards also pointed out the seal's design, stating, "let's just say, it sends kind of a weird message."

According to the village's official website, the seal commemorates an encounter between community founder Hugh White and a member of the Oneida tribe that "sealed a lasting friendship and confidence":

An Oneida Indian of rather athletic form was one day present at the White's house with several of his companions and at length for fun commenced wrestling. After many trials, the chief became conqueror and he came up to Hugh White and challanged him. White dared not risk being brow beaten by an Indian nor did he want to be called a coward. In early manhood, he had been a wrestler, but of late felt he was out of practice. He felt conscious of personal strength and he concluded that even should he be thrown, that would be the lesser of two evils in the eyes of the Oneida Indians than to acquire the reputation of cowardice by declining. He accepted the challenge, took hold of the Indian and by a fortunate trip, succeeded almost instantly in throwing him. As he saw him falling, in order to prevent another challenge, he fell upon the Indian for an instant and it was some moments before he could rise. When the Indian finally rose, he shrugged his shoulders and was said to have muttered "UGH", you good fellow too much".

According to al Jazeera, the current seal is a modified version of the original, which explicitly showed White's hands around the Oneida tribe member's neck. The design was changed after local tribal groups argued that it "demeans, disgraces and creates prejudice and distrust of Indian people." A proposal to change the seal again in 1999 by then-Mayor Joseph Walecki did not come to fruition due to a lack of alternatives. Ten years later, local officials told the Utica Observer-Dispatch that they had no plans of changing it.

But Cliff Matias, who leads the Redhawk Native American Arts Council in Brooklyn, told the Voice that the seal creates a different effect than city leaders intend.

"The first thought that anyone has of this image is, ‘There’s some white guy killing an Indian, strangling an Indian,'?” Matias said. “It’s saying, ‘Well, they didn’t just conquer and defeat the people, but they also beat them in a wrestling match.’ It’s utterly ridiculous that a town would have pride in a symbol like that in this day and age."

"I served as a law enforcement officer for 27 years. It is a tough job. And good police officers deserve your support," Demings said. She then accused Republicans of only supporting police when it is politically convenient, prompting Jordan to interrupt.