Obama: Repubs almost have enough candidates for 2016 to throw their own 'Hunger Games' 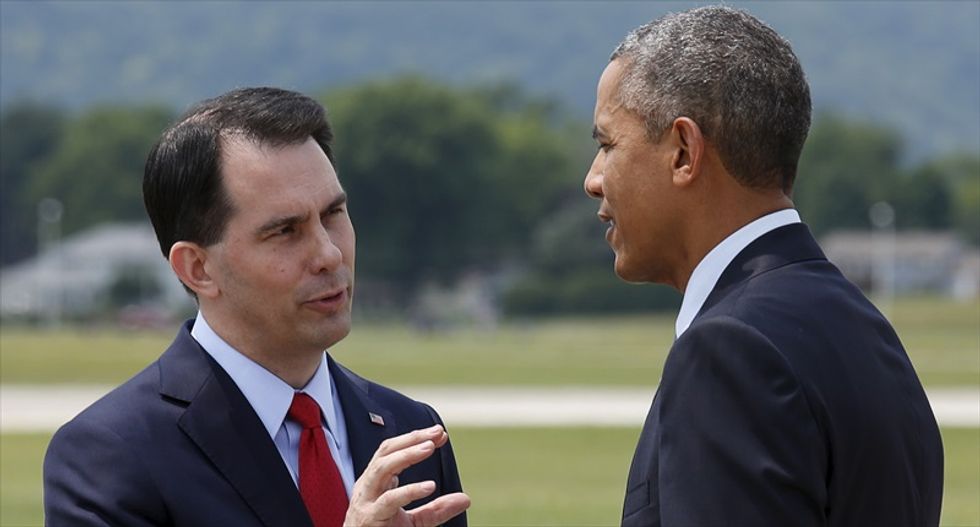 President Barack Obama is greeted by Wisconsin Gov. Scott Walker upon his arrival in La Crosse, Wisconsin on July 2, 2015. Photo by Kevin Lamarque for Reuters.

President Barack Obama ripped the policies of Wisconsin Governor Scott Walker and poked fun at the large crop of Republican presidential candidates on Thursday, injecting himself into the race to find his successor in 2016.

The Democratic president, who had largely avoided weighing in on the 2016 campaign, basked in a recent set of victories over his healthcare law, gay marriage and trade, and launched broadsides at the growing number of Republicans entering the race to succeed him in office.

"We've got some healthy competition in the Democratic Party, but I've lost count of how many Republicans are running for this job," Obama quipped in a campaign-style event.

"They'll have enough for an actual Hunger Games," he said, referring to the popular fight-to-the-death young adult novels.

Though he did not mention Walker by name, Obama clearly had him in mind. The two men met at the airport where Air Force One landed, shaking hands and chatting amiably.

But in his speech, Obama panned the tax cuts that Walker pushed through in Wisconsin. The president praised the neighboring state of Minnesota, where the jobless rate is lower, and where a Democratic governor has increased taxes but raised the minimum wage and expanded early childhood education.

He also criticized Walker's challenge to the collective bargaining process for most public unions in Wisconsin.

"We have to protect and not attack a worker's right to organize," he said.

Walker is expected to announce his presidential candidacy on July 13, bringing the number of Republicans in the race to 15.

"Over the next year and a half, you're going to hear a lot of pitches from a lot of people, they're going to deny that any progress has been made," Obama said about the candidates.

"They're going to be making a whole bunch of stuff up."

“It’s no surprise all President Obama has left are partisan attacks after spending the last six and a half years presiding over the weakest economic recovery in modern history and a declining middle class," said Michael Short, spokesman for the Republican National Committee.

Early in his tenure as governor in 2011, Walker burnished his conservative credentials by pushing for a law to limit collective-bargaining rights of public-sector employees. He survived a union-backed recall election in 2012.

Labor unions are a traditional ally of Obama, a Democrat, though that relationship was tested in June in Congress in a struggle over international trade.