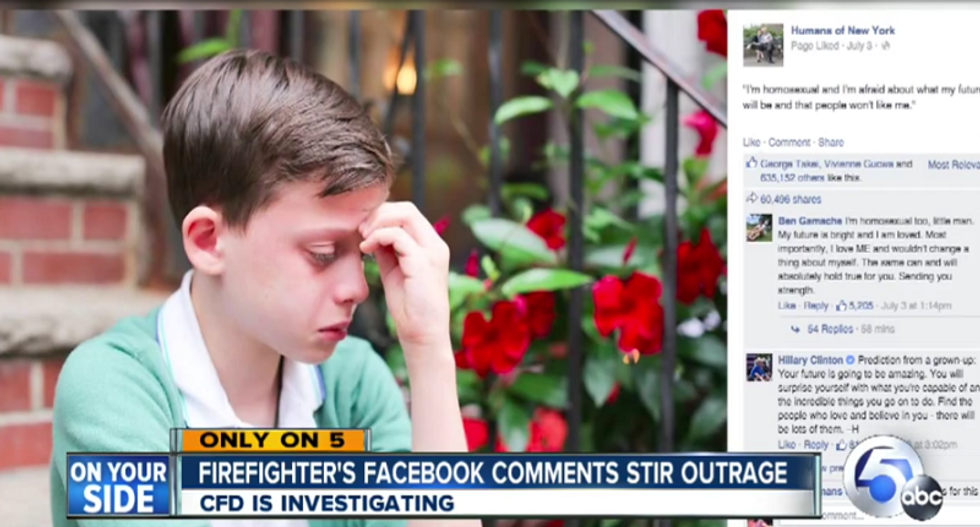 A Cleveland firefighter is under investigation for making homophobic remarks on a Facebook posting depicting a gay child on the popular Humans of New York page, NewsNet5 reports.

The July 3 post of a weeping child who is quoted saying, "I'm homosexual and I'm afraid about what my future will be and that people won't like me" sparked impassioned responses, including words of encouragement from presidential candidate Hillary Clinton. George Takei and California Lt. Gov. Gavin Newsome were among thousands who chimed in with "likes" and words of support for the youngster.

But 26-year Cleveland Fire Department veteran Guy Estergall threw his opinion into the mix of roughly 60,000 comments on the viral post.

"This kid needs psychiatric help, he's delusional. We need to find a cure for his kind!" Estergall wrote in the comments.

In an apparent response to another comment, he wrote, "You're mentally ill Andrew, just like this kid and the rest of the immoral homosexuals and their supporters," NewsNet5 reports.

Continuing on, he wrote, "The overwhelming majority of pedophiles are homosexuals. You need to get the professional psychiatric help you need to become normal."

Estergall told the station his comments were in response to a nasty exchange he got into, and he only meant to "get his goat" and "tick off" his opponent, who had started name calling.

"Was it childish? Of course. But this is Facebook, it was a 'nothing' thing," he said in an interview with the station.

But the department's spokesman Larry Gray told the station that the comments are "unacceptable" and the department "will not tolerate things like this." The department has launched an investigation.

Watch the report from NewsNet5 here: