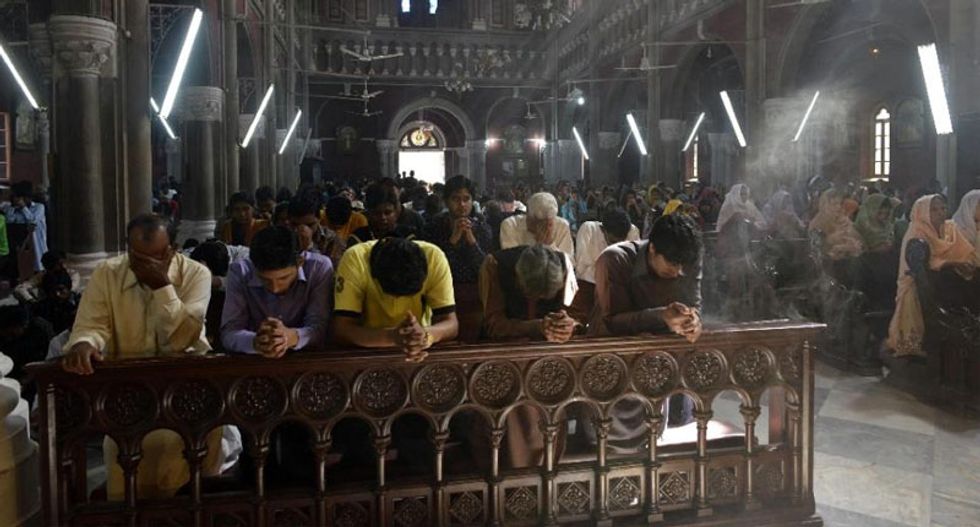 Pakistani Christians pray at the Sacred Heart Cathedral in Lahore on March 22, 2015 for a service for victims of recent church attacks. The attacks that killed 17 were the worst on the community since a devastating double suicide-bombing in the northwestern city of Peshawar in September 2013 killed 82 people. AFP PHOTO / Arif ALI (AFP Photo/Arif Ali)

Police in Pakistan saved a Christian couple from a Muslim mob who were attempting to lynch them for allegedly committing blasphemy, and later arrested a cleric for inciting the violence, a senior officer said Thursday.

The incident, which took place in the village of Makki in Punjab province on Tuesday, represents a rare successful intervention by authorities in a country where even unproven allegations of blasphemy can result in a bloody death at the hands of vigilantes.

Sohail Zafar Chattha, the district police chief, told AFP the illiterate Christian couple had obtained an old panaflex advertisement awning which contained the names and slogans of various colleges, which they were using as a mat to sleep on in their home.

Arabic inscriptions, allegedly from the Koran, were found among the colleges' slogans, leading one local barber as well as two clerics to accuse the couple of committing blasphemy.

"Muslims of the town gathered there and dragged the poor couple who didn't know what they had done. They were being beaten to death," Chattha wrote on Facebook.

"Police intervened in time and rescued the couple from the mob and shifted them to Lahore and handed over them to the elders of Christian community," he later told AFP.

Police have arrested one of the clerics while the other and the barber remain at large, he said. Some residents interviewed by the police said the barber may have been interested in obtaining the couple's house.

Pakistan's tough blasphemy laws, which carry the death sentence for insulting the Prophet Muhammad, are often invoked against minorities and the poor by those wishing to settle personal scores, according to rights groups.

"It is a positive development that the police is taking its duty seriously and protecting the accused in such cases," he said, adding he could recount three other instances where authorities had stepped in in time.

"If the state and its organs continue to perform their duties, the elements who take the law into their own hands will be discouraged," he added.

Christians, who make up around two percent of Pakistan's mostly Muslim population of 200 million, have been increasingly targeted in recent years, by both mob violence and militant attacks.

Bonded labourer Shehzad Masih and his pregnant wife Shama Bibi were beaten by a mob of 1,500 people then thrown into a lit furnace last year in a crazed reaction to rumours they had thrown pages of the Koran into the garbage.